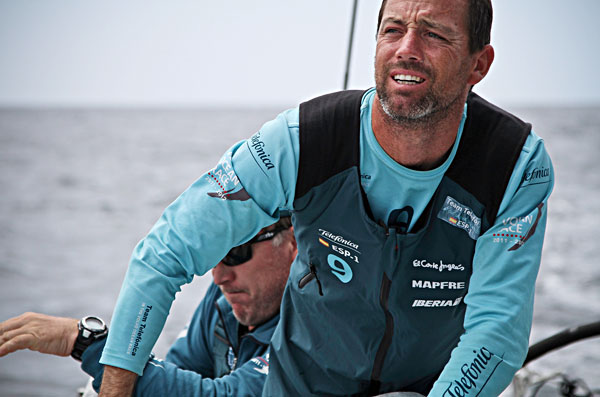 Up to 90 nautical miles ahead of their nearest rivals at one point, Ian Walker’s Emirati team have been steadily losing ground as the new weather system whisks the rest of the fleet up to them at average speeds over 20 knots.

That progress could stop suddenly – the boats are positioning themselves for a light wind zone off Lisbon that threatens to throw the leg standings wide open – but for now speeds are high.

At 1300 UTC Abu Dhabi Ocean Racing were 60 nm ahead of second placed PUMA Ocean Racing powered by BERG and 83 nm in front of CAMPER with Emirates Team New Zealand in third. Four miles behind CAMPER were Team Sanya who held a three nautical mile lead over Groupama sailing team and Team Telefónica in fifth and sixth.

Telefónica have a seven-point lead over Groupama with three legs to complete, while CAMPER and PUMA are poised respectively 13 and 14 points off the pace.

Despite having to watch the fleet inexorably closing them down with every position report, skipper Ian Walker said the Abu Dhabi crew remained confident of holding on to the lead ahead of what he predicts could be a photo finish in Lisbon.

“So far we have sailed a very good leg and everyone on board is fiercely determined to defend our lead for as long we possibly can,” Walker said.

“As the fleet charges east at ever increasing speeds towards Lisbon we know that it is highly likely that we will give up a lot of our once 90 mile lead to the chasing pack.

“I am not being defeatist, just preparing myself mentally for the fact that those behind will have more wind than us due to the advancing cold front picking everyone up from behind.

“One thing for certain is that there is going to be a very tight finish from first to last place in Lisbon. The weather gods have scripted that.”

PUMA navigator Tom Addis said the building breezes from behind were compressing the fleet rapidly with any one of the chasing boats able to break through to the lead.

“Abu Dhabi are still 80 miles ahead of us, but we’re pulling them in at eight or nine miles every three hours so it’s happening fairly quickly,” Addis said this morning.

“But the guys just south of us also have pretty good breeze right now, so they might get a pretty good break as well. We’ll see how we go. It’s a really difficult one to pick.”

CAMPER are fighting to hold off a rapidly advancing Sanya, who moved into fourth after a tactical move north yesterday paid dividends, while considering the rewards of finishing much higher up the Leg 7 leaderboard themselves.

“Meanwhile, we’re trying to defend against building breeze from behind, so the boats behind you are in better pressure. We’ve been forced to gybe in front of Sanya, who are visible quite clearly just off our starboard quarter.”

Oxley said he believed Leg 7 would ultimately be decided on how well the teams negotiate the light air ridge on the final approach into Lisbon.

“We’re all going to go barreling in there at high speeds and whoever picks their way through there and gets a bit of luck is going to probably be the one who comes out on top,” he said.

Fifth and sixth placed Groupama and Telefónica remain less than two nautical miles apart in terms of distance to the finish, with both teams fighting hard for a podium position in Lisbon, having picked up increasingly stronger winds in the cold front.

“The wind started to fill in around our last gybe,” said Groupama helmsman Erwan Israël. “We are sailing ahead of the front in 20 to 23 knots of wind and expecting up to 26 knots of wind.

“We kept gybing to get a better angle in the front and stay longer in it. Telefónica gybed a bit later and managed to overtake us. They are controlling us, but now we are in sight of each other and it’s really nice to fight like that.”

Latest estimates suggest the leading boats will complete Leg 7 from Miami, USA to Lisbon, Portugal on May 31.