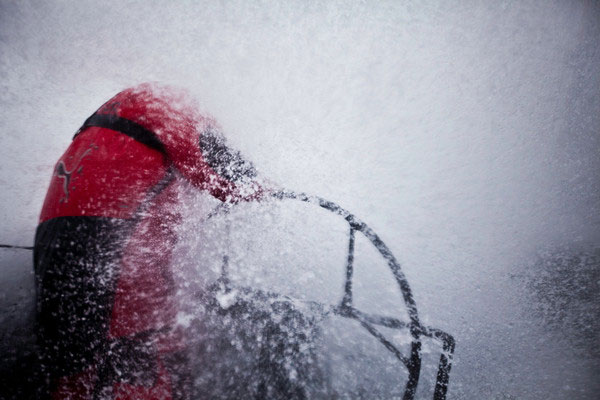 CAMPER with Emirates Team New Zealand are leading the fleet in a battle against more than 37-knot winds and six-metre seas on the brutal opening night of Leg 5 that has already forced Abu Dhabi Ocean Racing back to port with damage.

The fierce conditions caused by a tropical storm near New Zealand’s North Island are giving the teams no time to ease back into racing after the brief stopover in Auckland, and there is no relief in sight with the weather tipped to worsen to over the next 24 hours.

CAMPER navigator Will Oxley said the barometer on board the red boat was dropping and the sea state was building as the team prepared to batten down the hatches.

“It will be a long hard night ahead, it seems to be the norm to start each leg in particularly heinous conditions,” he said.  “Hopefully we can continue our trend of starting well, but this time carry it on through the entire leg.”

Oxley said his team was able to navigate to their lead by weaving around Rakino Island, gaining an advantage from the tide. At 1300 UTC CAMPER held a 0.3 nautical mile lead over PUMA Ocean Racing powered by BERG.

Overall race leaders Team Telefónica were third, and the only team on a port tack heading southeasterly, while Leg 4 victors Groupama sailing team were in fourth place followed by Team Sanya in fifth, just three miles behind CAMPER.

The crew on board Abu Dhabi’s Azzam returned to Auckland’s Viaduct Harbour at 1030 UTC and were visibly disappointed as they threw their mooring lines to their waiting shore crew.

The team were forced to suspend racing at 0630 UTC, just five-and-a-half hours into the leg, after their Volvo Open 70 crashed off a steep wave and ripped a bulkhead in their bow, which secures a crucial heavy weather headsail, clean out.

Skipper Ian Walker described the situation as “not disastrous”, saying that if it had happened a week into the leg the team would have carried on.

However, given the team’s location Walker said it made sense to return for repairs especially as they needed a sound bulkhead to enable them to use their J4 sail, which will be needed for as much as 80 per cent of the Southern Ocean stretch.

“We discussed it and took the decision that we’re only 40 miles from Auckland, let’s come back and we’ll probably repair it quicker and better, and then we can get back out and try to catch everyone up,” he said.

“The guys are back here in one piece and the problem is pretty straightforward,’’ he said.  “They were so close to our big resources here in Auckland that I think they made the right decision to come back. We will try to get the boys turned round as quickly as we can and get them back in the race. It should be 24 to 30 hours or so.”

To Abu Dhabi’s advantage, the fleet will continue to battle against the massive low-pressure system and transition into survival mode as the wind peaks to in excess of 40 knots Volvo meteorologist Gonzalo Infante said.

The fleet is likely to continue to trek north where they will find the best escape route to survive the worst of the storm’s might in offshore waters away from the Continental Shelf and pick up northerly winds on the eastern section of the storm.

As for Abu Dhabi, they are likely to face tough conditions if they depart in 24 to 36 hours.  “It will not be an easy departure, they will have a south-east wind gusting up to 35 to 40 knots with steep waves,’’ Infante said.

Leg 5 is the longest leg of the Volvo Ocean Race 2011-12. It takes the fleet on a 6,705 nm race through the Southern Ocean, around Cape Horn and on to Itajaí, Brazil where they are expected to finish in early April.