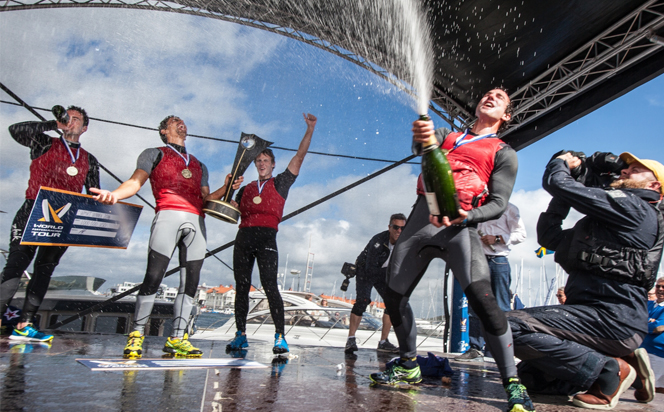 It’s the biggest prize in the history of sailing by a huge margin – a full million dollars for the winner of the 2016 Match Racing World Championship, at the culmination of the World Match Racing Tour in Marstrand, Sweden.

With reigning World Champion Ian Williams, a five-time victor, knocked out in the quarter-finals, the final match saw Kiwi Phil Robertson pitched against US Virgin islander Taylor Canfield. Robertson won the first race, but misjudged a mark rounding manoeuvre, smashing a hole in one of the hulls of his opponent’s carbon fibre M32 catamaran in the second. Once the penatlies were applied to the scores the New Zealander was trailing 0,1. Canfield led most of the next race, but Robertson found his way past at the top of the final upwind leg and charged down to the finish to even the scoreline.

Both teams threw everything at the final start and the first downwind charge to the bottom of the course. They were neck and neck going up the next upwind leg, as both crews wrestled their M32s through the tacks. Towards the top of the track for the last time the two boats converged on collision course and came to blows again, though this time only a glancing one. The umpires slapped a penalty on Canfield and Robertson seized the moment, racing away up the course and across the finish line to the roar of the crowd.

29-year-old’s whoops of joy and celebration were more about winning the title of Match Racing World Champion. “It’s a dream come true and the goal we’ve been striving for since 2009,” he told the crowd after stepping ashore. “Thank you all for watching, I hope it was entertaining because we sure had fun.”

2016 was the first season in which the event has used M32 catamarans instead of older, heavier monohull designs. Robertson went on to pay tribute to Håkan Svensson, who took over ownership of the World Match Racing Tour last year, and whose company Aston Harald builds and promotes the M32. “The boats are just so much fun. We’re having a blast. There have been a few sceptics about whether you can do match racing in multihulls. Well just take a look at that final. I’ve never had so much fun match racing as in these cats.”