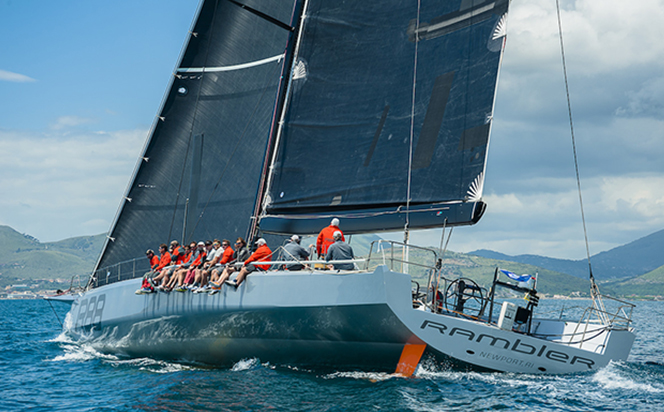 George David’s Rambler 88 won the sixth edition of the 398-mile Volcano Race in a time of 1 day, 14 hours and 20 minutes demolishing the race record and winning both line honours and the overall prize based on corrected time, thereby achieving the coveted ‘triple crown’.

The race started from Gaeta, between Naples and Rome, with the fleet then heading down the coast of Italy and across the Tyrrhenian Sea. Competitors then round the Aeolian Islands of Alicudi, Vulcano and Stromboli – one of Europe’s most active volcanoes – before returning past the Sorrento peninsula, Capri and Naples, to Gaeta.

Rambler 88’s record time came as a shock as a zone of high pressure had been long forecast. “I am surprised because the conditions were supposed to be light around the race course, but we averaged 10 knots,” says David. “We kept going pretty well… part of it may have been down south [when we kept moving] due to some wind shear and some wind aloft.”

For the first time this year, in addition to the Maxi entries, smaller boats with an IRC rating down to 1.102 were allowed to compete in the Volcano Race. They sailed a shorter course of 329 miles, rounding Stromboli and Strombolicchio. Eddie de Villiers’s Welbourn 46 Hi-Fidelity won this division. 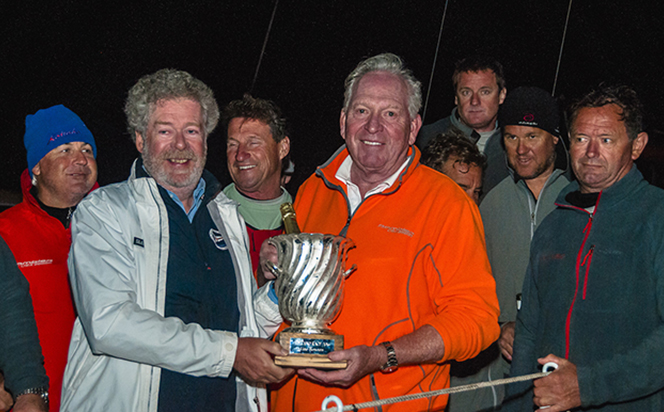 George David enthused about the race: “It is early in the season so a great time of year and a beautiful race course. We have been around it several times in the Rolex Middle Sea Race and it just seemed even better rounding Vulcano, Alicudi and Stromboli, which is such a distinctive island. It is just a great place to race. And Gaeta is a great little town. It is highly recommended – a great place. There was a good fleet, a mix of boats, good conditions and great scenery. I’ve had a great time here.”

The Volcano Race is organised by the International Maxi Association (IMA) in conjunction with the Yacht Club Gaeta and is hosted by the Base Nautica Flavio Gioia. This year’s race is the second of four events in the IMA’s inaugural Mediterranean Maxi Offshore Challenge.

Rambler 88’s next big event will be in a cooler climate for the Royal Ocean Racing Club/Wicklow Sailing Club’s Volvo Round Ireland Race – a 704-mile non-stop dash around the Emerald Isle that starts on June 18.