The port benefits from its distinctive architecture, fabulous beaches and enviable open spaces.

This distinctive purpose built port in the South of France has top-notch facilities for more than 1,500 yachts of up to 24m length. The distinctive 1960s architecture dominates much of the central part of the town, with most buildings arranged as distinctive multi-story pyramids.  Whether or not the style is to your taste, this is a hugely popular destination, with some two million visitors annually.

The town was designed as a resort from the outset, with extensive landscaped public spaces, which cover 70 per cent of the land area, and a refreshing lack of road traffic. The location was originally the site of an extensive sand dune system and even today the town’s seven kilometres of beaches will not disappoint.

Although the permanent population numbers fewer than 10,000 people, on shore there’s everything you’d expect of a high-end French resort, including a wide range of excellent restaurants as well as clothes shops and jewellers, with many top brands represented. Not surprisingly, La Grande Motte is also a great place for provisioning. 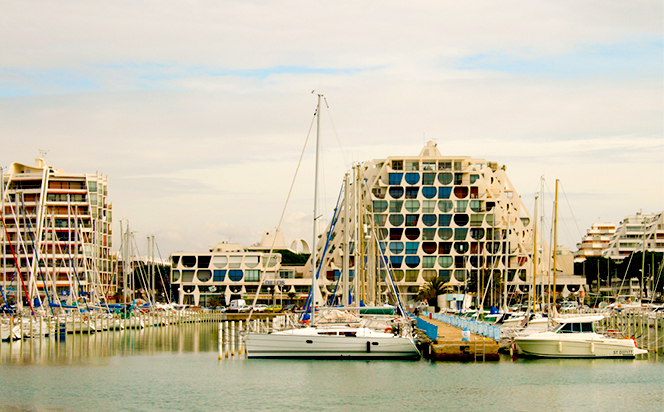 The marina is also the location of one of the Mediterranean’s premier training establishments for long distance racing.

The huge marina has berths for more than 1,500 yachts, with maximum draught of 3.7 metres. There’s also a huge boatyard with a 50 tonne hoist and all facilities for both minor work and major refits, along with a choice of chandlers and a full range of marine trades. The port also has a proud yacht-racing heritage, thanks to an organisation called CEM, arguably the most successful training base for high-level professional racing in the Mediterranean, and specialising in long-distance single-handed or double events.

La Grande-Motte is only 10 miles from Montpellier airport and only a further five miles from the city centre, the eighth largest in France. It’s also an easy sail to a number of other French ports, including Port Camargue (3.5 miles), Carnon (4.5 miles), Sète (20 miles) and Marseille Vieux Port (62 miles).