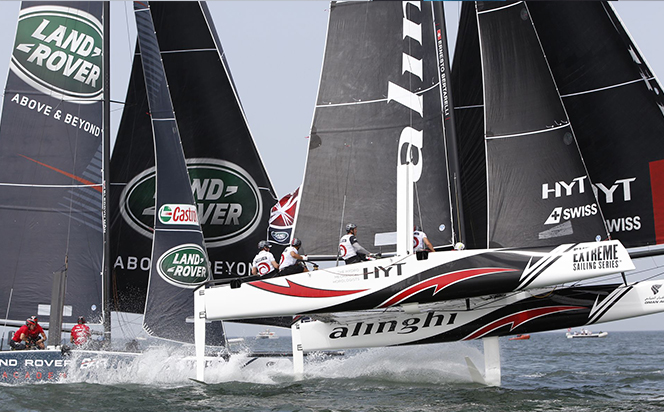 FullSizeRender-1: Starting the season as one of the favourites, Alinghi finish the first Act in fourth place after an eventful final day. Photo: Lloyd Images

The Extreme Sailing Series’ landmark 10th season kicked off with racing for its new fleet of foiling GC32 catamarans in late March. In addition to the new boats, the format of the racing has been changed, with the incorporation of match racing and the chance to open up the racecourse in some venues with 20km coastal races, in addition to the close-quarters stadium racing the series pioneered.
Among the crews are veterans of 13 Olympic and 22 America’s Cup campaigns. Between them they hold 27 world championships, 27 European championships and 106 national titles. The 2016 season’s first event was in Muscat, Oman, where local boat Oman Air, skippered by Morgan Larson, stormed home to an extraordinary win. Larson’s team of Pete Greenhalgh, James Wierzbowski, Ed Smyth and Omani national Nasser Al Mashari won more than half the races sailed. 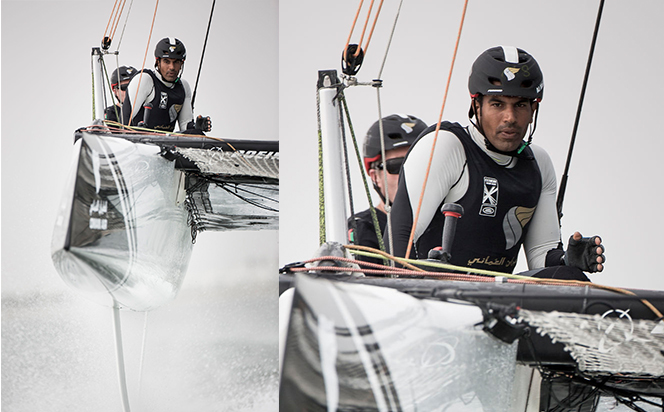 “It was a phenomenal week for the whole team and obviously great to do that here on home waters,” says Larson.” We sailed at the highest level we have, so it’s going to take a lot of work for us to improve from here. We know that a few of the other teams have some things to do and when they get that right, they’re going to be right there with us. We know they’re going to push and we have to keep on getting better.” 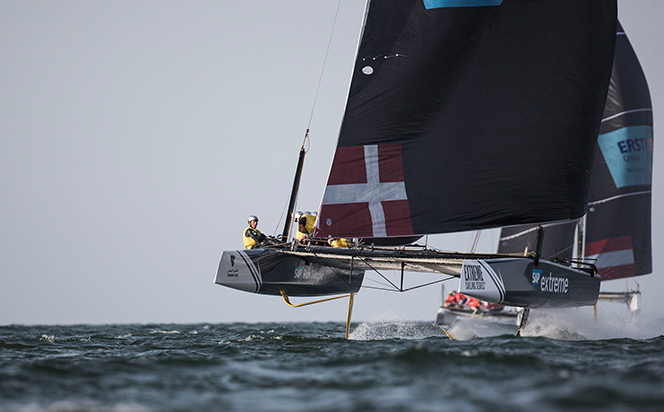 A mistake on the final day of racing in Muscat, Oman knocks SAP Extreme Sailing Team off the podium in to 5th place after starting the day in 2nd. Photo: Lloyd Images
The wind cranked up for the final two races that saw the eight GC32s flying around the track, teetering on the edge of control. In the final race, where four boats were gunning for overall podium positions, the Danish SAP Extreme Sailing Team missed a mark rounding. On realising their error, they crash-gybed, almost losing bowman Renato Conde in the process. It was a mistake that resulted in zero points in that race and a tumble down the rankings to finish fifth overall.
The next event on the programme is at China’s Olympic Sailing City, Qingdao, in May, before moving to the UK shores in Cardiff, an event that attracted a record numbers 120,000 spectators in 2013.
Overall standings
1st Oman Air (OMA) 217 points
2nd Red Bull Sailing Team (AUT) 184 points
3rd Land Rover BAR Academy (GBR) 175 points
4th Alinghi (SUI) 172 points
5th SAP Extreme Sailing Team (DEN) 166 points
6th CHINA One (CHN) 153 points
7th Team Turx (TUR) 140 points
8th Sail Portugal (POR) 138 points