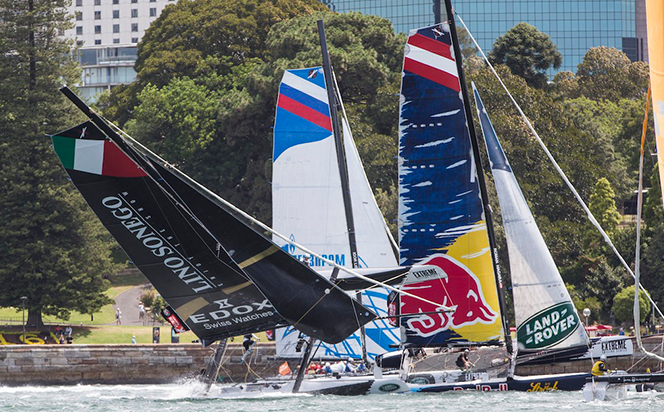 The ninth edition of the Extreme Sailing Series finished in a blaze of excitement in Sydney, Australia in mid December. It was a windy event that saw both capsizes and plenty of collisions during four intensive days of racing on Sydney Harbour. Leigh McMillan’s The Wave, Muscat went into the final event of the eight event series as favourite. Victory in Sydney would also see him take an unprecedented trio of overall titles, following wins in 2012 and 2013. However, his team struggled during the first two windy days.

The first day of racing saw carnage on the racecourse that locked spectators onto the edge of their seats. Local entry and the only female skipper at the event, Katie Spithill, was first to fall foul of the full-contact racing when her boat, 33 South Racing, was T-boned on the start of race three by Lino Sonego Team Italia.

Despite the gaping hole in the back of her vessel, Spithill valiantly finished the race in a respectable fifth place, before limping back to the dock for overnight repairs. “The Italians tried to duck us and misjudged it. We finished the race thinking we could tape up the hole but it turns out it’s a lot bigger than that,” explained Spithill.”

It wasn’t long before the Italian team succumbed to damage. GAC Pindar, in another collision, wrecked their steering gear in race seven, resulting in both teams retiring from the day. Gusts of wind topping 30 knots the following day saw only half the fleet racing at any one time. Even then the Italians fell foul of the conditions, capsizing while trying to avoid a collision with the Red Bull Sailing Team.

The first two days were not good for McMillan and his crew of British double Olympic gold medallist and current ISAF World Sailor of the Year Sarah Ayton, America’s Cup sailors Pete Greenhalgh and Ed Smyth and Omani sailor Nasser Al Mashari. However, they fought back to the top of the leader board on the penultimate day, and eventually finished the event with the 13-point advantage on the Danish SAP Extreme Sailing Team.

It was a performance that earned The Wave, Muscat a 15-point victory in the championship. “We live for days like today, it was absolutely awesome,” said an elated McMillan after picking up the Land Rover Above and Beyond Award for man of the match. “It means so much to me, I just feel so chuffed about the way it’s gone. Sailing with the team and building those relationships has been incredible.”
This was the last year in which the Extreme Sailing Series will use its well-known Extreme 40 catamarans. In 2016 the competition will take place in the foiling GC32 catamaran.
Caption: Lino Sonego Team Italia capsize their Extreme 40 during race 2 of the day on Sydney Harbour. Credit: Lloyd images
Caption: Leigh McMillan celebrates becoming the most successful skipper in Extreme Sailing Series history. Credit: Lloyd images