Insufficient watch keeping was cause of collision

by admin • December 9, 2015 • Features, older • Comments Off on Insufficient watch keeping was cause of collision • 1851

Dredger: The gear on the bow created a 4-5 degree blind spot on the bridge of the dredger – the yacht remained within this area and was not seen by the watch keeper · Credits: Crown copyright, extracted from the Accident Report on the investigation of the collision between the dredger Shorewayand the yacht Orca

There are times at which it’s all too easy to assume that a vessel that you have seen on a safe bearing will maintain its course until it has passed well beyond your craft. However there’s no guarantee of that, which is why the International Regulations for the Prevention of Collisions at Sea prescribe that other vessels must be effectively monitored until they are past and clear.
When sailing a yacht in good visibility and daylight it’s all too easy to assume that others have seen you clearly – after all, many ships can be easily seen at a distance of five miles or more. However, even in ideal conditions, most yachts are indistinct at distances in excess of only one mile.

An illustration of this is the tragic collision off the east coast of the UK between a 97m long dredger and a Moody 31 yacht in light airs and good visibility during the month of June.

The yacht, which had been navigating in shallow water outside the buoyed and dredged channel leading to the port of Harwich was catastrophically damaged and sank within only three minutes.

The subsequent Marine Accident Investigation Branch report found that, when the two vessels were 1.6 miles apart, and at that time not on a collision course, the yacht’s skipper went below deck, leaving the boat steering on autopilot.

However, the lone watch keeper on the dredger had not seen the yacht – she remained in a blind spot behind the vessel’s dredging gear – and altered course out of the marked shipping channel. 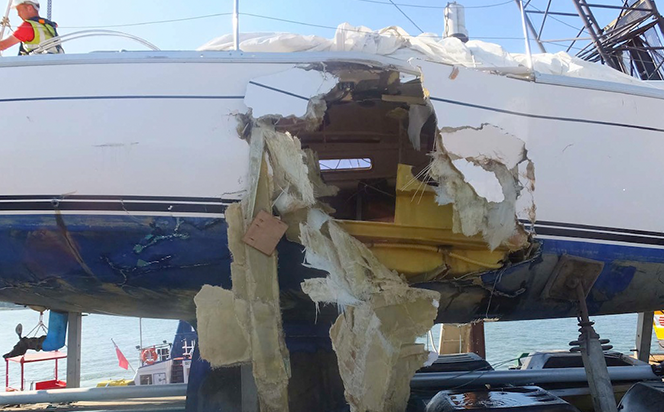 Yacht: The yacht suffered catastrophic damage and sank within three minutes · Credits: Crown copyright, extracted from the Accident Report on the investigation of the collision between the dredger Shorewayand the yacht Orca

The MAIB noted a number of deficiencies in the manning and operation of the dredger – including a lack of two watch keepers on the bridge – and that the yacht had been visible on radar for more than 10 minutes before the collision.

However, if the yacht’s skipper had maintained his lookout, then he would have seen the dredger’s change of course and would have been able to take appropriate action in time to prevent a collision.

The report concludes that: “as neither the chief officer, who was alone on the bridge of Shoreway, nor the skipper of Orca, who was below deck in the cabin, were maintaining a proper lookout during the period immediately prior to the collision.”
The full report can be read at: click here