Polished gelcoat, with a protective layer of wax on top, has the potential for a near super yacht level of finish.

At the end of the season even the best of topside finishes can start to look somewhat jaded. Often this is what prompts owners to paint their hulls, but there are often better long-term solutions that are also significantly more economic.

Even badly faded gelcoat can be brought back to a deep lustre through careful sanding, starting with 800 grit (and sometimes even coarser) abrasive paper in an orbital sander. Next use 1200 grit paper before polishing and waxing.
Despite what paint manufacturers, with their big marketing budgets, would like us to believe, aggressively cutting back the oxidised outer layer of the gelcoat like this will quickly make the boat look almost like new – it’s simply a case of cutting enough of the damaged top layer away to reveal the shiny gelcoat underneath. In most cases it won’t take more than a couple of days on a 50ft yacht.
Of course, at this stage of the season there may also be some dings and scratches in the gelcoat that will require filling and fairing, which can be a time consuming process.

If your boat is only a few years old it’s often possible to get gelcoat of the exact colour from the manufacturer.

If not, get a larger batch made up so that you have some spare for any damage in the next couple of years – colour matching is a skilled task that can easily add €100 to the final bill. 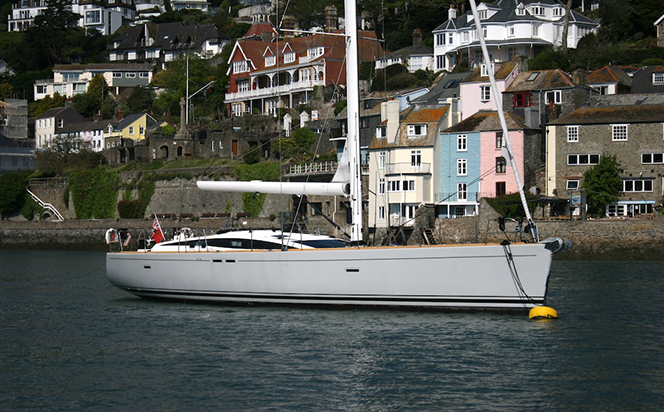 Beware of a cheap paint job – it will inevitably prove to be a false economy.

However, there may be situations in which you are forced to paint the boat, for example because it has already been painted, or because the gelcoat is wearing thin.

At all costs resist the temptation to economise on this process – a great paint job, using top quality materials, has the potential to last for the best part of a decade.

On the other hand a rush job with low-cost paint can have significant problems after only a few years, particularly if the paint is soft enough for fenders to wear through the top coats.

Given that much of the cost of repainting is in labour, spending extra on a product like Awlgrip, which is harder than gelcoat, makes a great deal of sense.

It’s then also worth making sure no corners are cut in the preparation, because you know the result will last for a long time.