It was not so long ago that this central American country was shunned by the cruising community and for good reason – crime was rife and large areas were controlled by drug cartels. Instead many voyaging yachts, either dodging the hurricane season further north in the Caribbean, or en route to Panama, would spend time in Venezuela. Once there they had the luxury of cheap living to a high standard and exceptionally low fuel prices.
However, the political situation has now reversed in many respects, thanks to a new found stability in Columbia at the same time that social unrest has been rapidly growing in its eastern neighbour. Perhaps the best illustration of this is that the World Cruising Club chose the Columbian port of Santa Marta as its first destination for the current World ARC rally. 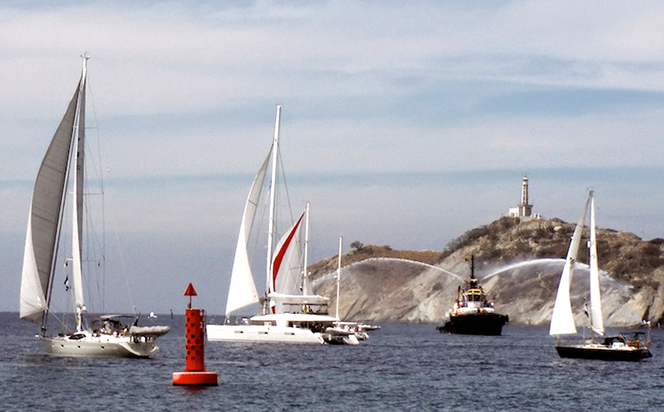 The fleet boats visited the beautiful historic port city of Santa Marta earlier this year. It benefits from a recently-built world class marina run by the IGY Group, which also operates Rodney Bay Marina in St Lucia, plus a further eight locations through the Caribbean and as far north as the Hamptons, in New York.
The Columbian marina has 256 berths, including five for super yachts of up to 40-metre length, 3.5m draught and 9m beam. Facilities include shore power, water and wifi, as well as a boat yard, chandlery, several restaurants and an ATM. There’s also a heliport and customs and immigration officials on site, as well as an international airport only 10 miles away. Nearby there are also excellent modern hotels, plus a couple of supermarkets, including a branch of Carrefour.
Santa Marta was founded in 1525 by the Spanish conquistador Rodrigo de Bastidas, making it one of South America’s oldest surviving cities. It’s lodged in a dramatic setting, with spectacular beaches that enjoy the backdrop of the country’s highest peaks, the snow-capped Sierra Nevada de Santa Marta mountains.

It’s also worth taking excursions to the nearby Tayrona National Natural Park, which encompasses mountainous terrain, virgin rain forest, which runs almost down to the sea, amazing beaches and coral reefs. For anyone venturing from the Lesser Antillies towards the Panama canal this is now clearly an excellent stop-over en route to Panama’s San Blas islands.