The apparently light slime on the bottom of this Swan yacht will be eliminating any gain from her expensive top of the range sails.

By this stage of the season many yachts have been afloat for several months and are liable to be starting to have a build up of slime or even weed on the antifouling.

This is likely to be pronounced in areas with warm water, or where there is significant pollution or fertiliser run-off from the surrounding land that creates a nutrient rich environment in which marine organisms can thrive.
While many cruising boats tend to ignore the problem completely, this can be a counter productive approach as even a very thin coating of slime can cause a loss of boat speed of up to half a knot.

Don’t underestimate the importance of removing this slime, since it harbours nutrients on which more aggressive forms of fouling can thrive. 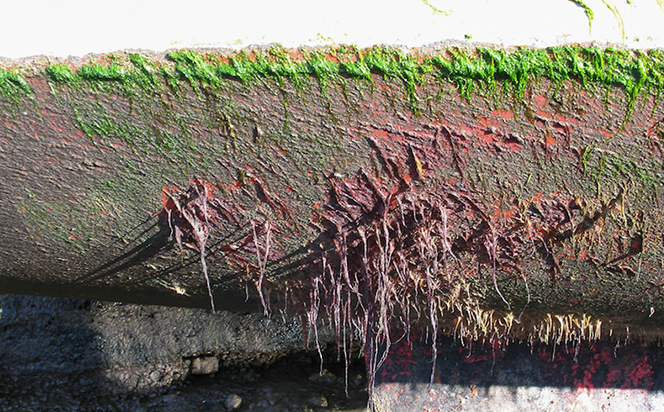 Fouling does not need to become anything like as severe as this to have a significant impact on the speed – and even safety – of a yacht.

At the other extreme, severe fouling can become a safety issue that prevents a boat being readily manoeuvred or makes it impossible to make progress to windward away from a lee shore in strong winds.
If your boat is among the many that suffer from some underwater growth during the season, what can be done about it? The good news is that a haul out and re-antifoul is rarely required.

A light coating of slime can often be removed with the boat afloat, either from the dock, using a proprietary cleaning implement on a long pole – there are a number on the market for the purpose – or by engaging the services of a diver. If completed at regular intervals during the season this can keep a boat surprisingly clean all year.
However, there may also be reasons to haul the boat ashore for a full pressure wash.

These include excess fouling that cannot be cleaned off with the boat afloat or, for those who do some racing, to ensure the bottom is absolutely as clean as possible for maximum performance.

Care is required for boats with eroding types of antifoul – although this can withstand a gentle pressure washing mid season, a heavy blasting may remove sufficient surface material to reduce the effectiveness of the coating for the rest of the season.
Although keeping a yacht’s underwater areas clean involves a little extra work, just as with a properly serviced and maintained car, you can be sure that your boat will behave with the handling and speed that the designer intended.