Sir Ben Ainslie’s Land Rover BAR team has won the first of the Louis Vuitton America’s Cup World Series events held in the run up to the 2017 America’s Cup.

The regatta was held in Ainslie’s team’s home waters, close to the shore outside Portsmouth Harbour, on the South Coast of the UK. 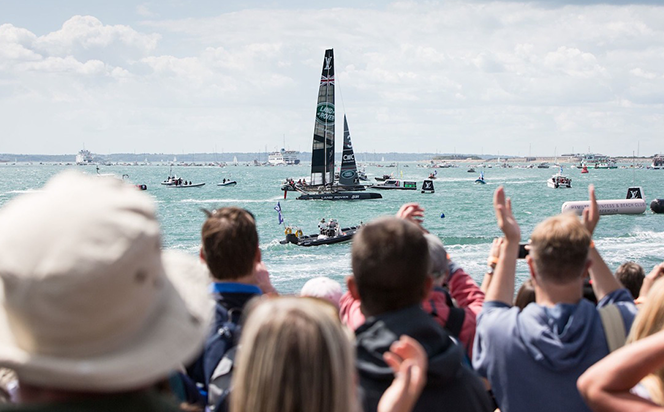 Tens of thousands of fans thronged to the onshore vantage points, while more than 2,000 boats crowded the spectators areas surrounding the racecourse.

It was the first event for which the modified foiling 45ft America’s Cup World Series boats were used. On a sunny and mostly light airs opening day of racing Ainslie’s team won the first race, before then opting for the wrong side of the course in the second race. Nevertheless after a few tense minutes, reminiscent of Team Oracle’s outstanding come back in the 2013 Cup, Ainslie’s crew crossed the finish line in second place. 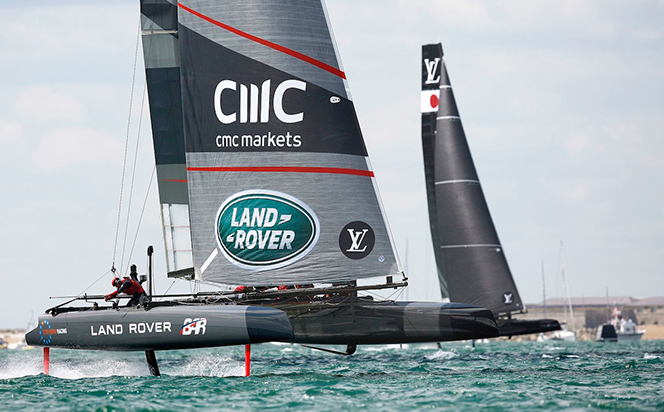 “It was a great day for us to finally be racing in this America’s Cup, and on home waters and in front of a home crowd here in Portsmouth. To get two solid results [means] I’m really excited for the team,” he told reporters on stepping ashore at the end of the day’s racing.
“Race number one was a tough one, we had a good start and then got a bit lost on that first downwind leg, but the guys did a great job to get the Code Zero – the downwind sail – up pretty quick, and that pulled us through. Then Giles [Scott], our tactician, really sailed well with the wind shifts and great crew work from the guys to get us into a nice lead and hold on into the finish. We’re very pleased with that race win. 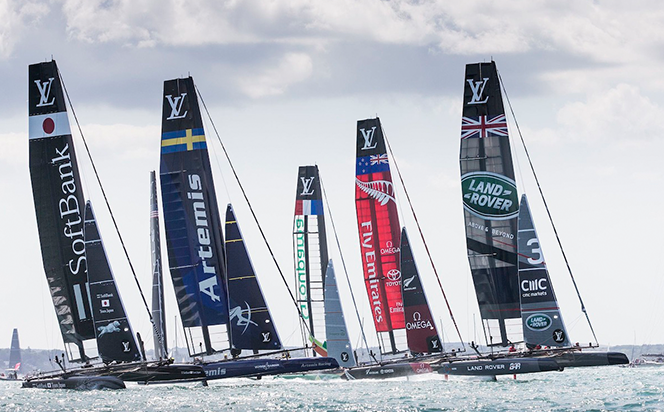 The fleet lining up on foils for the start of the beach at Southsea
“In race two we had a really nice start, and were leading at mark one, but it’s very difficult in those conditions to pick the direction to go, and we gybed and led to the right hand side downwind, but the left paid.

It put us back in the fleet again, and the guys dug really deep to pull us through again for a first and a second on the day, we’re very happy with that as well.”
Sadly the British summer weather put paid to the second day of racing, thanks to driving rain with gusts of wind exceeding 30 knots.

A similarly dire forecast for the following day, which had been held as a reserve day, saw the event decided on just the opening two races. The next regatta in the series is in Gothenburg, Sweden at the end of August, followed by Bermuda in mid October 2015.