Team SCA could be a force to be reckoned with in the next edition of the race. Corinna Halloran / Team SCA / Volvo Ocean Race

The latest edition of this iconic fully-crewed round the world race, 40 years after it was founded as the Whitbread Round the World Race, has seen a number of significant milestones. The biggest of these was the use of identical one-design boats for the first time, which reduced costs for sponsors and consistently produced the closest competition the race has ever seen. 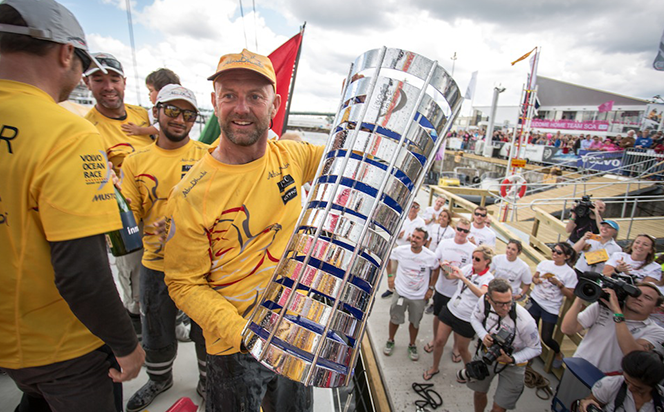 Nevertheless, many familiar elements remained, not least the delicate balance between pushing the boat and crew as hard as possible in arduous conditions and the need to scale back the effort to prevent damage.

It was a balance that the most experienced crew in the race, British double Olympic medallist Ian Walker’s Abu Dhabi Ocean Racing team on Azzam, managed to perfection.

While they by no means dominated the podium, they achieved a top-three finish in all but two of the nine legs. It was an impressive performance that saw Walker’s team take the trophy at their third attempt.
“It’s an amazing feeling, so much hard work goes into it,” Walker told the assembled press at the finish in Gothenburg.

“My whole relationship with the race started as a kid with pictures of the boats on the wall. I did my first Volvo Ocean Race two editions ago and I really wasn’t sure if I’d be up to it. I wondered what the Southern Ocean would be like, lots of self-doubt, and it’s been a long, old road.

Abu Dhabi skipper Ian Walker with the trophy for which he has fought for almost a decade. Matt Knighton / Abu Dhabi Ocean Racing / Volvo Ocean Race

We’ve made a lot of mistakes and we’ve learned a lot of lessons and this time round we threw all that experience in place and it worked.”

However, this was also an edition of the race that should give hope to many of the other teams.

The Chinese entry, Dongfeng, with a team made up of mostly French short-handed stars, plus Chinese sailors, and managed by UK-based OC Sport, put up a stunning performance and would certainly have done better had a broken mast in the gruelling Southern Ocean section not dented their overall score.

A quick glance at the final scoreboard might suggest that the all-women crew on Team SCA were languishing well astern of the men in the other boats during the nine month event, with the exception of Team Vestas Wind that was wrecked in the southern Indian Ocean.

However, the overall scores mask just how close the racing was – for the most part there were only tiny differences in the speeds achieved by all the teams.

In any case the women showed their potential by winning several in port races, as well as the offshore leg from Lisbon to Lorient. Their potential for a great result in the next edition of the race, which starts in late 2017, should therefore not be under estimated.