There can be few destinations that match sailing up to Manhattan on your own yacht. While New York is not on the main cruising routes for European sailors, the appeal is such that it is nevertheless a popular destination. The city has a huge number of options for mooring, including marinas in prime areas such as Manhattan’s West 79th Street Boat Basin, which also has lower-cost mooring buoys in the Hudson River for monohulls. 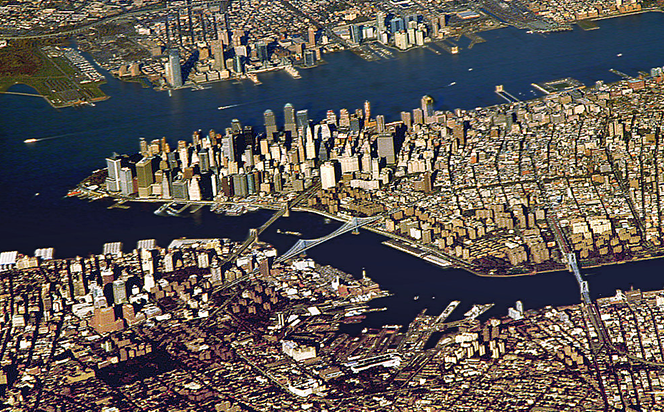 Downtown from the air: This aerial shot shows just how much of New York can be reached from the water.
Credit: dsearls – Flickr.com

The Hudson River opens up above Manhattan and is navigable for almost 150 miles by deep draught yachts with air draught of more than 35 metres. Half Moon Bay marina, 25 miles north of New York City on the Hudson River is another potential stop, with lower rates than in the city itself. Beyond that, it’s possible for yachts that drop their masts to reach the Great Lakes via a well-maintained canal system.
Similarly, the entire coastline around New York, including the extensive, but relatively sheltered waters of Long Island Sound, is one of the world’s best nautical playgrounds. There are numerous bays, islands and estuaries here, with facilities to match the best found anywhere on the planet. 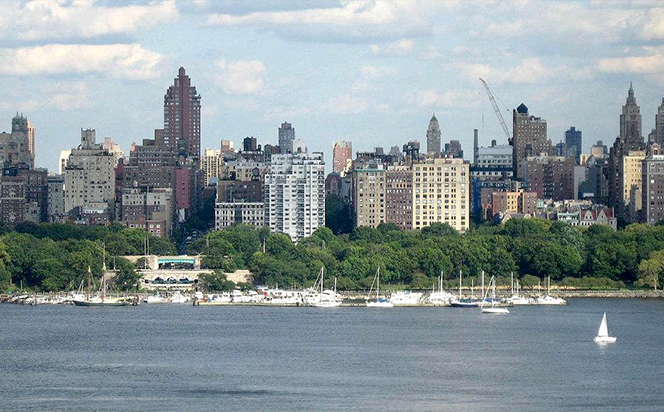 The 79th Street Boat Basin seen from Gutenburg, New Jersey, on the opposite shore of the Hudson River
Credit “79th St Basin Gutenberg jeh” by Jim.henderson – Own work. Licensed under Public Domain via Wikimedia Commons –

Indeed, facilities both in the city and on the New Jersey and Connecticut coastline are so extensive it’s impossible to mention them all. However, simply spending time with a map or chart and looking at all the possibilities makes for a fascinating way to spend a few hours of planning or dreaming.

Spring and early summer are the best times to visit, as this avoids the heat of mid summer and the possibility of storms that started life as hurricanes in the Caribbean. This timing also allows the possibility of working north from the popular winter sailing areas in the Caribbean, Florida and maybe Bermuda, once winter storms have dissipated, and would also leave time to return across the Atlantic, via the Azores. However, many cruisers are sure to be tempted to spend a second summer season exploring this area before returning home.