Ian Williams and his GAC Pindar team gained his fifth ISAF match racing world championship at the Monsoon Cup in Johor Bahru, Malaysia in February. In doing so the British sailor surpassed Australian America’s Cup veteran Peter Gilmour’s record of four wins (in 1990, 1997-8 and 2006).
Five teams went into the final event of the World Match Racing Tour’s 2014/15 season with a mathematical chance of winning the title. However, statistically, the fight was always going to be between Williams and Canfield. 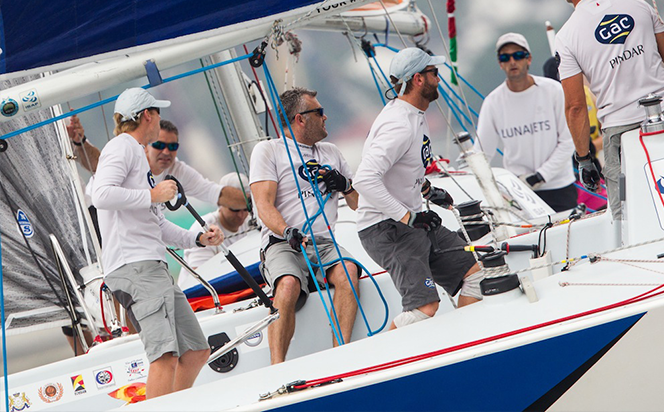 Williams notched up 19 wins and just 1 loss to take his 5th ISAF World title and 3rd Monsoon Cup. © Robert Hajduk / AWMRT
Williams went into the final event with a six point cushion on last year’s champion, US Virgin Island skipper Taylor Canfield and his US One team. However the Briton still needed to finish within one point of Canfield to regain the world title. In the qualifying rounds both skippers lost only one of their 11 races, but Williams gained a psychological advantage after beating Canfield in their match. Victory at this stage also allowed Williams his first choice of opponent in the Quarter Finals.
In the semis the British team was pitched against rising Swiss star, Eric Monnin and his SailBox team, who put up one of their best ever performances to gain a semi-final place. However, Canfield was up against Matthieu Richard, a 12-year veteran of the Tour who has already notched up three podium places and in 2010 was only narrowly beaten into second place overall by Sir Ben Ainslie, the most decorated Olympic sailor ever. 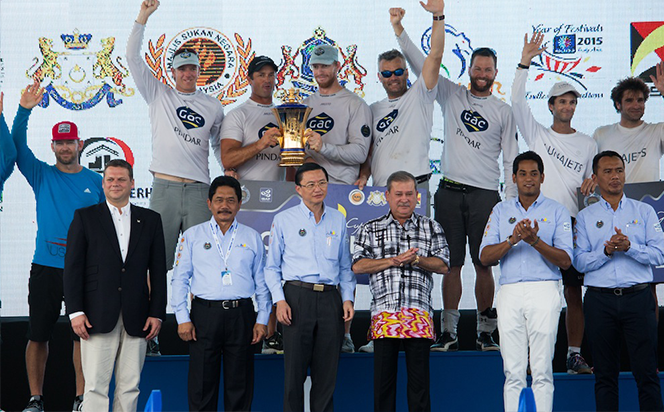 With Richard winning their first two races, Canfield was firmly on the back foot, before coming back to win the third race. However, the French team won the next race, and their place in the finals. Meanwhile, Williams secured himself a place in the finals, by dispatching Monnin in a 3-0 victory.
“It’s incredible,” said Williams on learning he had won the world championship. “When I started sailing full time, giving up my job as a lawyer, I was hoping to win one world championship one day, so to win five is incredible. I can’t say enough about the great job these guys did on board today. Eric [Monnin] did a great job of keeping the match close, but the boys sailed the boat really fast and smooth, and that was what kept us in the race.”
Williams was crewed by Gerry Mitchell (mainsheet), Mal Parker (trimmer), Chris Main (pit and tactics) and Graeme Spence (bowman).