The Caribbean regatta season is now upon us, including the Royal Ocean Racing Club’s non-stop 600-mile offshore race that starts and finishes in Antigua. The course, which takes in 11 Caribbean Islands, initially takes the fleet in a northerly direction as far as St Martin, before heading south to Guadeloupe. It also takes in in Barbuda, Nevis, St Kitts, Saba and St Barth’s.

The 15 knot easterly trade winds at the start suited the biggest boat in the 66-strong fleet, Lloyd Thornburg’s Phaedo^3. Sailing with an all-star crew including French legend Michel Desjoyeaux and Britons Brian Thompson, Sam Goodchild and Pete Cumming, the conditions suited the 70ft trimaran to perfection. In the first 24 hours she covered an astonishing distance, often exceeding 30 knots of boat speed and averaging more than 20. She went on to complete the course in just 33 hours and 35 minutes and in doing so slashed more than six and a half hours off the previous record, set by Claude Thelier and John Burnie’s ORMA 60, Region Guadeloupe. 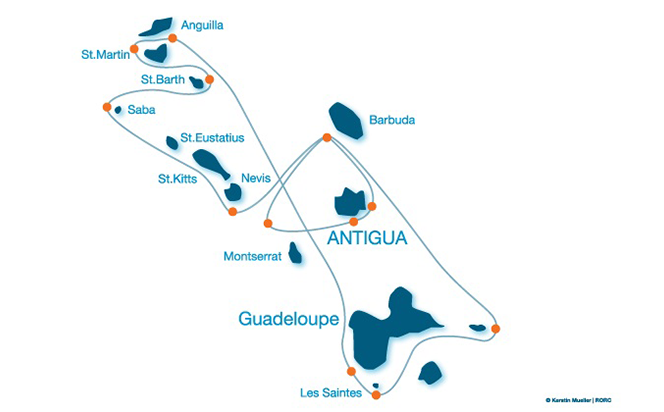 George David’s Juan K designed Rambler 88 was the next boat to finish taking monohull line honours 10 hours later. However, she was some four hours short of the monohull record, set by David’s previous boat, Rambler 100, four years ago, when he also won on corrected time.
The next big Caribbean event is the St Maarten Heineken Regatta, which starts on March 6, followed by the Lora Piana Caribbean Superyacht Regatta and Rendezvous at the Yacht Club Costa Smeralda in the BVI’s Virgin Gorda. The next big events include the BVI Spring Regatta in early April and Antigua Sailing Week in early May.

Scarlet Oyster: Although it’s the big boats that tend to hog the limelight, most competitors are in smaller vessels like the boat in the foreground of this shot, Scarlet Oyster, Ross Applebey’s Oyster Lightwave 48 ©Tim Wright/Photoaction.com