The first leg of the current edition of the only fully-crewed and professional round the world race showed that the new fleet of 65ft one design yachts are, as predicted, very evenly matched.

However, few could have predicted just how close the racing would be in leg two – after 5,200 miles and 23 days of continuous racing the first two boats arrived only 16 minutes apart, with the third following less than two and a half hours behind.

In an interesting twist, on arrival at Abu Dhabi, the order of the first three finishers was exactly reversed compared to their finish at the end of the first leg in Cape Town. As a result there’s now a three-way tie for first place between Team Brunel, Abu Dhabi Ocean Racing and Dongfeng Race Team. Further down the fleet, the Spanish Mapfre entry was fourth to cross the line, 16 hours behind ADOR, with Team Alvimedica fifth and the all women crew on Team SCA in sixth place. At some point in the leg every boat in the fleet, with the exception of Team Vestas Wind, held the lead.

Team Brunel skipper Bouwe Bekking highlighted just how close the racing on this leg was, saying: “It’s nice for us to win, because it would have been easy to finish last.”
It was an eventful leg that saw the fleet leave Cape Town in winds gusting 40 knots, before negotiating the steep sees around the Agulhas current off the south coast of South Africa. They were then forced into a compulsory course change into what had previously been a forbidden area, which was originally intended to keep them clear of pirate activity, so that they could skirt the edge of a tropical storm. 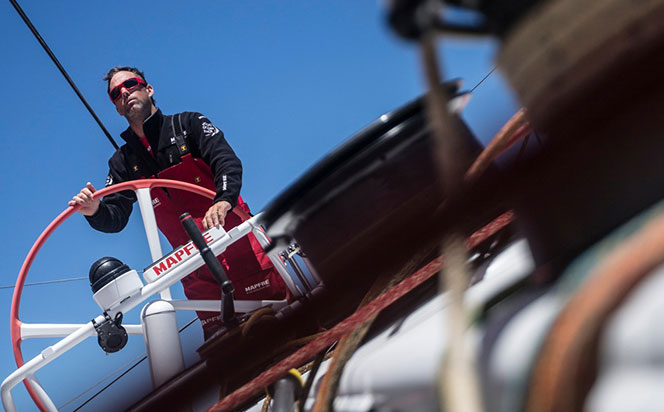 This was followed by a disaster for the seventh team, Vestas Wind, which ran aground on the remote Cargados Carajos reef that had previously been in the exclusion zone. The incident happened at night, while sailing at a speed of 19 knots, and made headlines across the globe. The boat stuck fast on the windward side of the reef, with the crew forced to abandon to their life rafts a little before dawn the following morning.
Fortunately there were no injuries and the crew was able to salvage a considerably amount of gear, including diesel and hydraulic fluid from the vessel. Although the hull is clearly a write off, at the time of writing salvage operations were being explored. An independent report into the incident is scheduled to be published in late February or early March 2015. 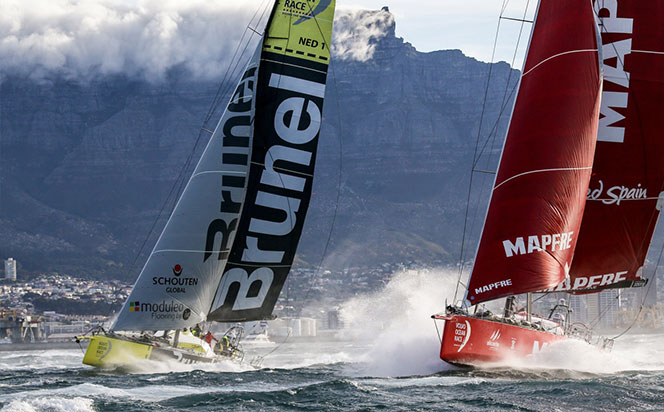 Brunel and Mapfre storm away from the start of the second leg in Cape Town.
[Note: no info for credits was supplied with this image]
The next leg of the race, which started on January 3, 2015, will take the teams 4,670 miles across the Indian Ocean, Malacca Strait, Singapore Channel and South China Sea to Sanya in China. They are expected to arrive there around the end of January.