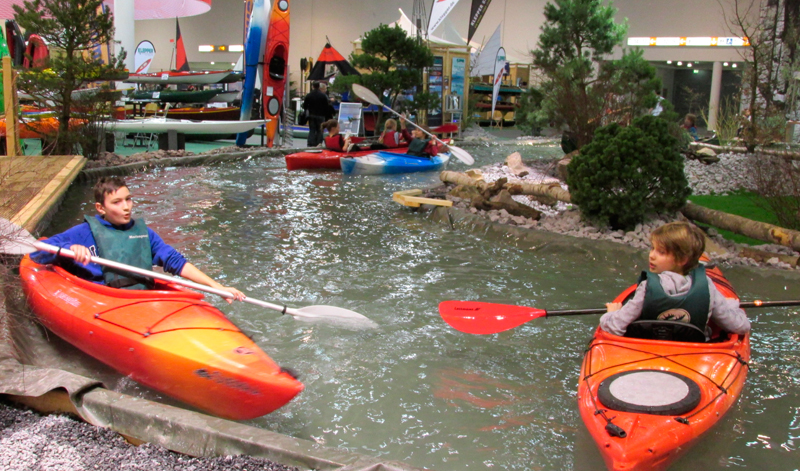 The word ‘awesome’ seems to be much overused these days, but having attended this year’s Boot Duseldorf at the massive World Trade Centre in the German city, we really feel comfortable with applying it here.

Awesome is the best word we can think of to describe 17 huge halls featuring every kind of vessel that the imagination can stretch to, along with boating holidays, marinas, sailing schools, nautical associations and a few conferences thrown in. Combining precision logistics and slick organisation is something that the Germans really do excel at, and nowhere can it be seen more vividly than at this Goliath of boat shows which just seems to keep growing and getting busier year after year!

The exhibition’s new slogan is ‘Experience 360° Water Sports’, said by the organisers to signify; “The combination of a traditional boat and water sports trade fair with positive emotions and adventure.”

In this, its 45th year the Chief Executive of the organisers Werner M. Dornscheidt said; “This is the most important trade fair of its kind, attracting 1650 exhibitors from 60 countries and occupying 213,000 square metres of exhibition space.”   Obviously visitors agreed with him, because 248,600 yachting and water sports enthusiasts passed through the 17 halls in 2014, compared to 226,300 last year!  Summing up the show after it closed Dornscheidt said; “We have fully met the expectations of the industry. As before, Boot Düsseldorf proved its function as a driving economic force that is highly attractive on an international scale. The stands were attended by throngs of professional German and international visitors, keen to make purchases. In addition to German visitors, the trade fair was also attended by another 48,000 from 65 countries,”

Apart from the wonderful array of new models, both sail and power, which we bring you more news of in MedBerths.com this month, the other strong feature that we noticed in Dusseldorf was a big increase in interactive attractions. These ranged from informal seminars and presentations, (there was a seated forum area in almost every hall,) to sailing lessons for kids, lifesaving at sea instruction, and even an indoor canoeing and mountain climbing area, which seemed very popular. This seems to be the shape of Boat Shows to come; simply putting boats on stands is a thing of the past.