WILL BRITANNIA RULE THE WAVES ONCE MORE?

Alan Priddy thinks so. He explains why to Clive Tully. 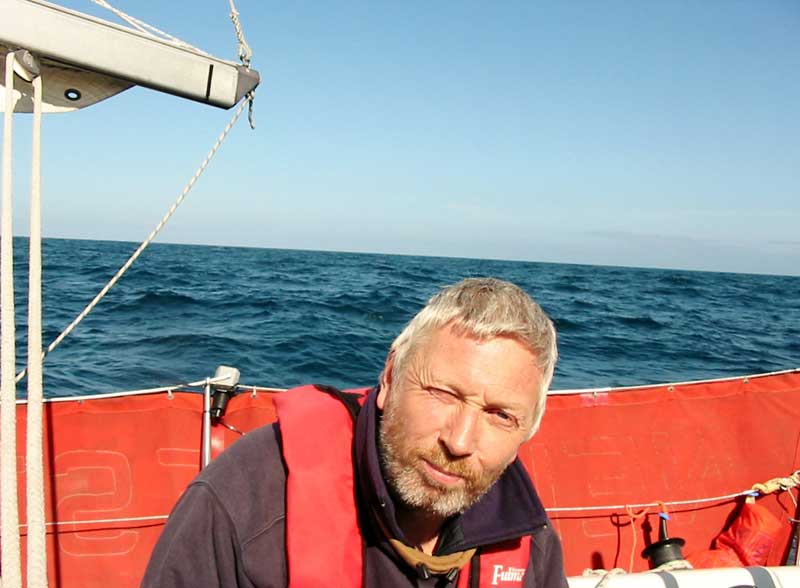 While Ellen MacArthur undoubtedly revived British interest in round the world sailing, Alan Priddy has managed to bridge that uneasy divide between the worlds of sailing and powerboating. And although his powerboat circumnavigation of the world in the RIB “Spirit of Cardiff” in 2002-3 set out to break records, his subsequent circumnavigation by sail in Sir Alec Rose’s legendary yacht “Lively Lady” in 2006-8 was more about changing young peoples’ lives. But even as he was sailing the last legs around the world in 2008, Priddy was following closely the progress of the New Zealand powerboat “Earthrace”. 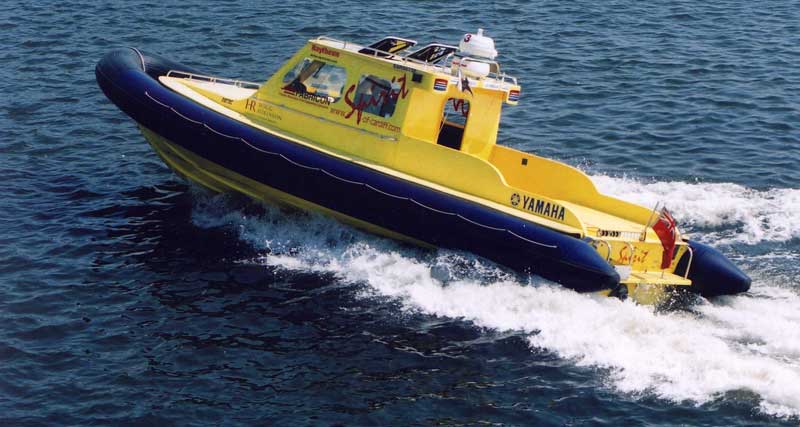 The Spirit of Cardiff

“There was always an element of unfinished business after Spirit of Cardiff,” admits Priddy, “long before Earthrace made her successful 61 day circumnavigation. We knew what type of boat we needed for another go, and it was just a question of setting up a project and obtaining the funding to make it happen.”

First drawings of a new powerboat emerged in 2009, and by the time construction began at a specialist metalworking factory in Dudley in 2011, the design had evolved into a fierce-looking 90 foot wave-piercing vessel with waterjet drives and the largest inflatable tubes seen on any boat. But with the hull more or less complete, the project received a massive kick in the teeth when fire gutted the adjacent factory unit in May 2012. 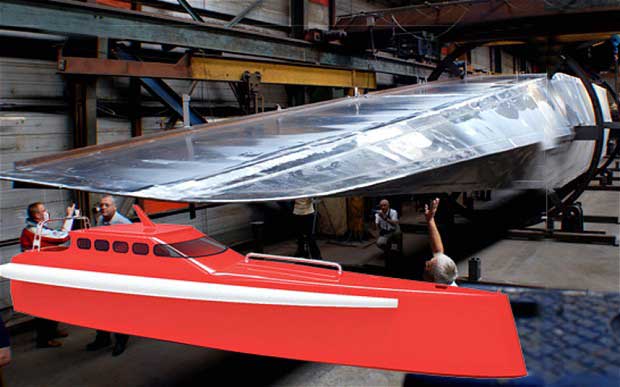 The original boat before being destroyed by fire

“We were delayed several weeks waiting for access to our unit,” says Priddy. “When we got back in, initially we thought damage to the boat was nothing more than a superficial film of soot from the smoke. Only after we picked up on the construction once more did we realise that it was more serious. Even though the fire was in the unit next door, the heating in ours was sufficient to weaken the entire aluminium structure of the boat.”

Fainter hearts might at this point have thrown in the towel, but even as the boat was condemned as unsafe, for Priddy there was no question of giving up. “It meant having to find another boat-builder,” he admits, “but we did strike lucky in locating a company specialising in aluminium boat construction not far from my base in Portsmouth.”

It was an extra stroke of luck when he managed to engage the design services of Professor Bob Cripps, arguably the country’s top naval architect. The result is that round the world boat number two will be quite different from the one that was scrapped, although Priddy remains coy as to how different it will be. “People will see the new boat when she’s launched, and not before,” he says, “but she will have that ‘Wow!’ factor!” 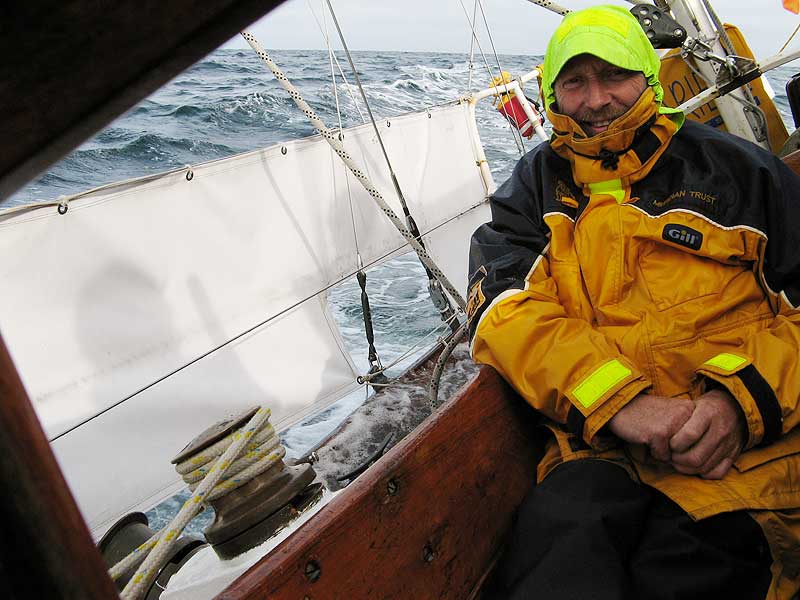 Somehow in that limbo between boat number one and boat number two came a twist in the story courtesy of American Ralph Brown, who with his brother Bob made an audacious crossing of the Atlantic in 2009 in a flats fishing boat. With a new boat under construction and their eyes also on the Earthrace record, they challenged Alan Priddy to a race. “That was a gauntlet I couldn’t possibly leave on the ground,” says Priddy. “Now we have the first ever powerboat race around the world!”

The numbers of people working on Priddy’s project – now patriotically named Team Britannia – vary from time to time, but at its maximum, including those working on promoting the corporate side, boat designers, builders, and the boat’s crew, there have been over 50 involved. That demands the project managing skills of someone who has built a successful business.

The Spirit of Cardiff setting off from Gibraltar in April 2002

Priddy left school when he was 15, and was indentured as a boat builder. “I did that till I was 17”, he explains, “and then I started my own business. I’d run my garage, fixing taxis during the evenings, and I kicked it off by working during the day as a labourer for three bricklayers. I did that for two years, working virtually 20 hours a day, by which time I’d built up sufficient funds not to have to work on the building site any more, and I’d made enough money to buy a few toys.” 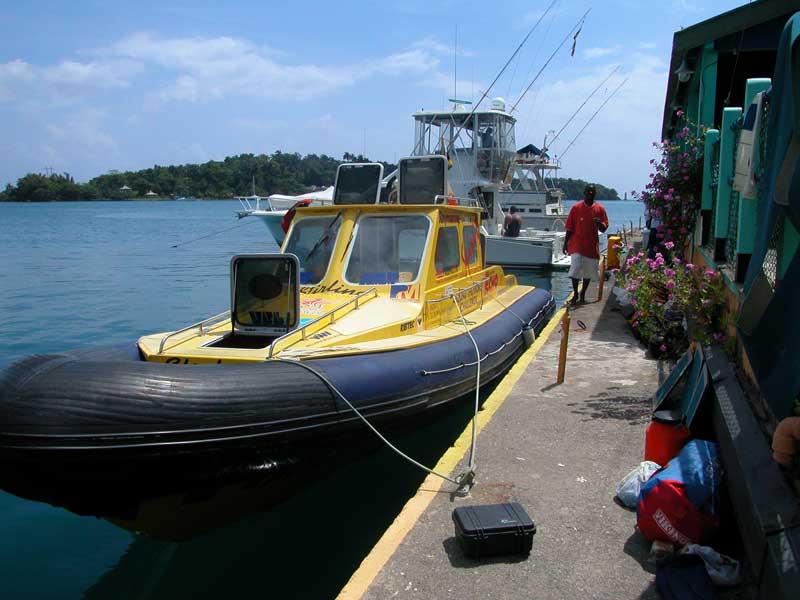 Port Antonio after a 5 and a half day Caribbean crossing

For toys, read fast cars. He had a Lotus Seven for fine weather, along with a Triumph Spitfire for less pleasant conditions and other occasional use. By the time he was 20, Priddy was driving a Bentley, “at which point,” he adds jokingly, “it all went downhill from then on.”

Priddy’s main business, the Portsmouth-based Express Gearbox Company, promotes itself as the UK’s top repairers and reconditioners of automatic car gearboxes. Not satisfied with that, he opened factories in Fort Lauderdale in Florida, and shared an interest in a transmission company in Portugal.

So what’s the formula for this kind of success? “We look a lot further ahead than the market we’re dealing with,” says Priddy. “When new units start to filter through, we’re already briefed on all the technical problems they’re likely to have. We always work very closely with the manufacturers.” 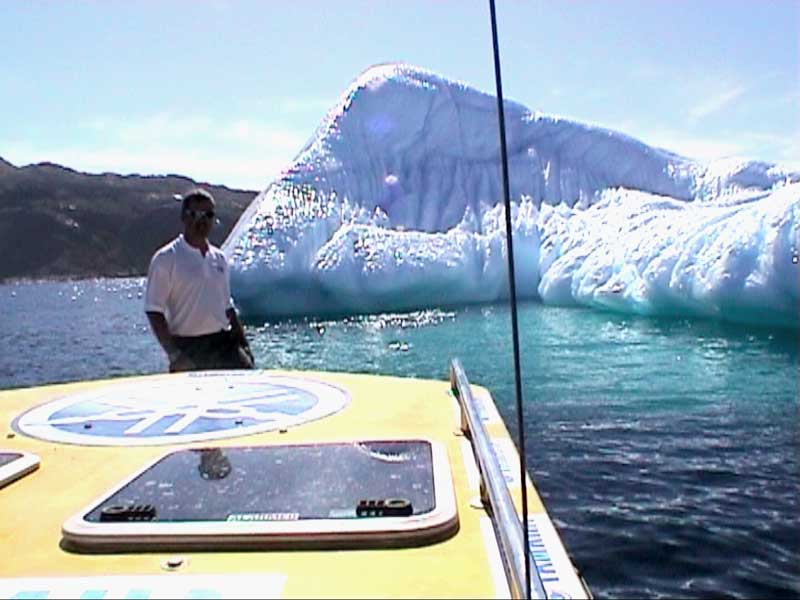 With co-skipper Jan in the Northern Artic

In all of Priddy’s 60 years, he confesses there are just eight in which he hasn’t been messing around with some kind of boat – everything from canoes, dinghies and sailing boats to powerboats. “I just love being on the water,” he admits.

But perhaps it was fate taking a hand in 1989 when he spotted a magazine advert looking to set up a group of like-minded people to do some exploring in rigid inflatable boats, or RIBs. It ended up with a group of 40 setting off from Inverness to go for a jolly all the way around Scotland.

After that, Priddy was hooked, and went on to make his mark with RIBs, using his engineering skills to develop boats capable of going much further than the standard models, and amassing a substantial number of world records along the way – including a record transatlantic crossing in 1997 which earned Priddy and the rest of his crew a nomination for the prestigious “Yachtsman of the Year” award – the only time any powerboaters had received such recognition. 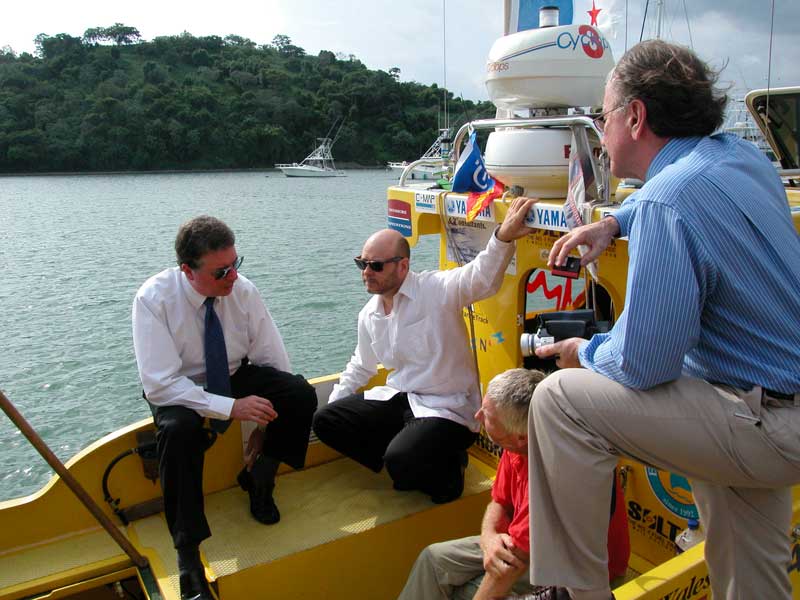 Meeting the HM Ambassador in Panama

“That was an extremely tough trip,” says Priddy “and one I’d never want to do again. The crew all suffered frostbite, and they had to dig deep for willpower to keep them going when it would have been very easy to give up.” In fact, Spirit of Cardiff’s round the world trip in 2002 didn’t prove so different. With problems seemingly queuing up to have a crack at Priddy and his crew – mechanical breakdowns, horrific storms, pirate encounters, sleep deprivation, illness and injury (his tally included a trapped nerve and broken collar bone), officious third world bureaucracy including 24 hours of “house arrest” in Russia – he faced down each problem.

The last one, when crewman Steve Lloyd suffered a heart attack in mid-Atlantic just days from the end, proved to be the final straw. “Once it was all over,” Priddy recalls, “Steve, Clive Tully and I were assessed as having experienced three months of stress equivalent to being in the middle of a war zone! Even so, we learned a lot,” he adds. “There are an awful lot of pitfalls to taking a powerboat 24,000 miles around the world. ” 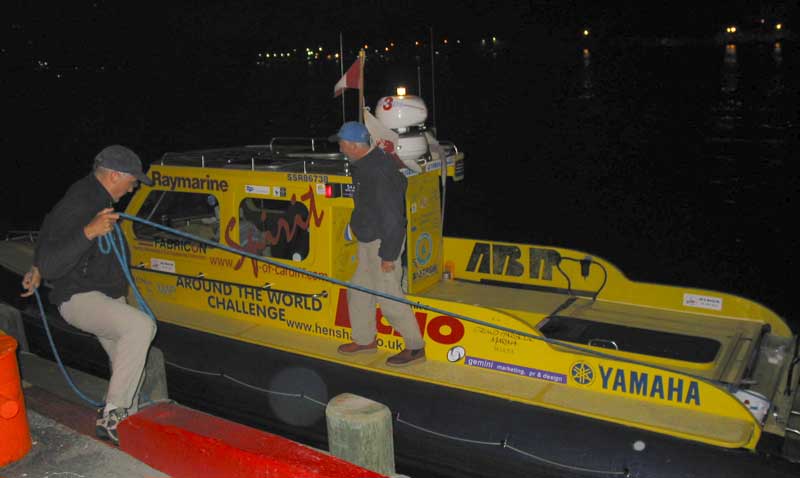 If fast cars is an expensive hobby, there’s no doubt that fast boats for record attempts is even more. So how does he fund it? It started out coming from his own pocket, the result of running a very successful business, but Priddy also banks on support from the marine industry – companies such as engine manufacturers Yamaha, or the electronics company Raymarine. But finding the very deep pockets that Team Britannia requires has proved more of a challenge.

“It’s been tough,” Priddy admits, “but the one thing we have been able to offer is a lot of media coverage. We’ve always been very fortunate in getting good coverage for everything we’ve done, and we can point out to potential sponsors what they’ve missed out on already.” But while big corporate backers are essential for a project with a multi-million pound budget, Priddy has always tried to get as many individual supporters as well. “These, after all, are the people who will be following us on TV and in the press, our social media outlets and blog,” he adds. “I want as many people as possible to share in our epic voyage.”

He’s also a firm believer in using high profile events to raise money for charity. His 1997 transatlantic crossing raised a substantial six-figure sum for a cancer care charity, while his hundred-hour London to Monaco run the following year raised around £15,000 for Childline. But while he has raised considerable sums for charity over the years, Priddy is also unstintingly generous with his time. Taking over the stewardship of “Lively Lady”, the classic yacht sailed around the world by his childhood hero Sir Alec Rose, meant spending a huge amount of time on organising a complete refit before actually sailing her around the world once more. Each leg of the voyage had the boat crewed by young adults from disadvantaged backgrounds. 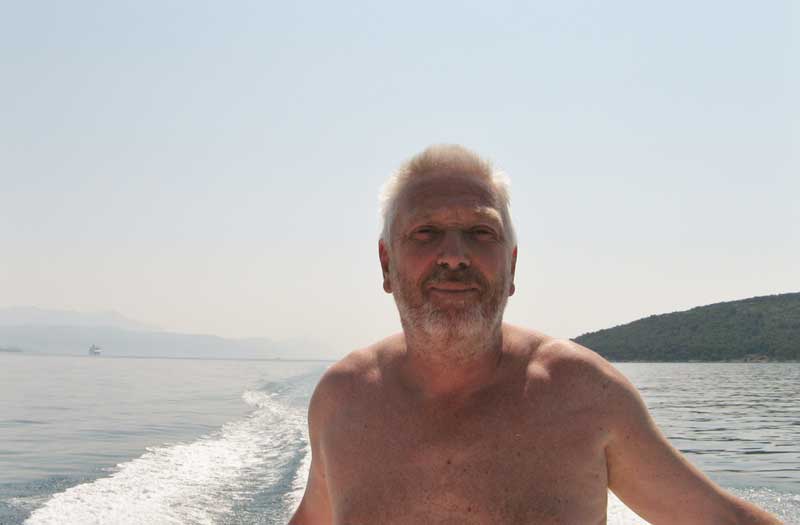 Alan is really only at home when on the water

“It took them out of their comfort zone,” says Priddy, “but learning to sail also showed them the value of teamwork, responsibility and trust. They all came away from the Raymarine Lively Lady Project better people, and many have gone on to achieve things they simply wouldn’t have dreamed of before.”

That includes continuing the ideal of that voyage by forming a charity called Around and Around, where some of the original crew members pass on their experience to others, and in the process ready Lively Lady for yet another voyage around the world. “I’m sure Sir Alec Rose would be very proud of what we’ve achieved with his boat,” smiles Priddy. “We’ve given a lot of young people with what most would regard as a fairly bleak outlook the chance to turn their lives around.” 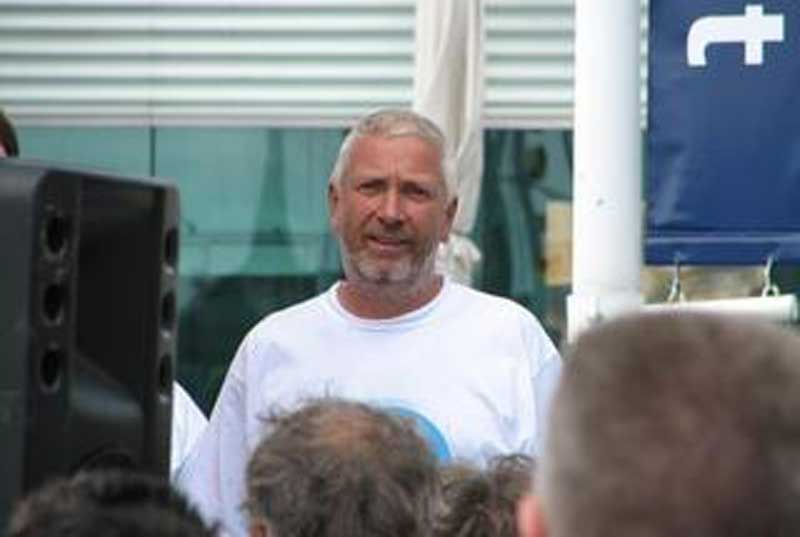 Alan Priddy addresses the crowds after his successful circumnavigation

So what about after Team Britannia have won the race against Team USA, at the same time taking the Earthrace circumnavigation record? Alan Priddy is already thinking to the future. It’s here that his favourite phrase “I have a plan” gets another airing. “It’s an expensive plan,” he admits, “but it will definitely make people sit up and take notice!”

Clive Tully is the onboard journalist crew member of Team Britannia.