THE Managing Director of Princess Yachts International, Chris Gates, has re-assured its 2,200 staff that job cuts are not on the horizon despite the luxury boat market facing difficult times.

He said the recession-hit world economy, particularly in Europe, is shrinking the yacht market but he is determined to retain the company’s large Plymouth workforce to prevent key skills being lost.

But he insisted the firm would fight back by winning orders ahead of rivals.

And Gates wants to prevent this skills drain by embarking on a huge retraining exercise in a bid to shift staff to producing in-demand 100ft-plus vessels.

In July, Princess Yachts announced profits had tumbled by more than £6million – but it still made a £15.1million surplus on increased turnover.

But talking to The Plymouth Herald, Mr Gates said that although the business is stronger, the overall market has deteriorated.

“The world is a tougher place than a year ago,” he said. “In our industry there is going to be contraction and we have to work hard to gain more market share.”

Princess Yachts this year bought the freehold to its new 20-acres site in Devonport Naval Base’s South Yard, for an undisclosed sum.

Larger vessels will be developed and built in the yard and work has started on the first phase of a £35million production facility.

“We have invested in the South Yard and a huge amount of money in new product development,” Mr Gates said. “We are prepared to sacrifice profitability to long-term investment and to keep the workforce together.

Mr Gates said that during the 1990s recession the company shrank so much “it took over a decade to recover the skills base. We are high-skilled and the workers are our greatest asset.”

He said this ability to re-organise to tackle new opportunities is what differentiates Princess from its competitors.

And Mr Gates said that in order to battle a shrinking market, particularly in countries such as France and Italy where the wealthy are being squeezed by taxation, the firm will also have to be more competitive and look further afield. 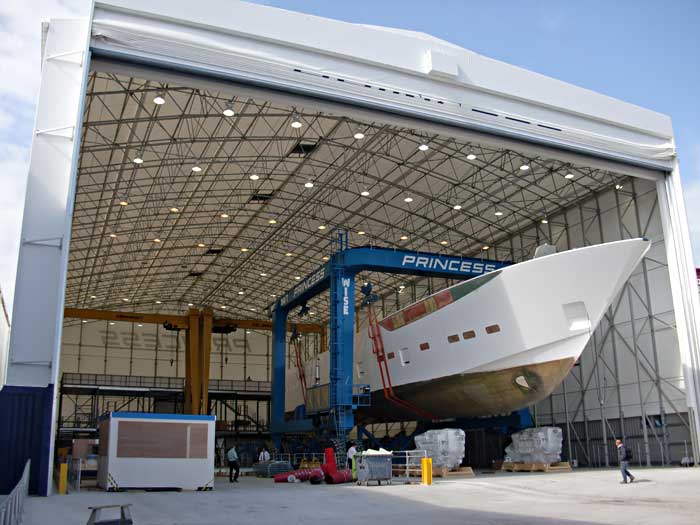 “We are looking at Central and South America, the Far East, the Middle East, and to do more business in the emerging markets,” Mr Gates said. “But there is a huge cost in establishing your name in a market that does not differentiate in quality of product.

“It takes a lot of investment in time, money and effort.”

Mr Gates said the firm is also targeting the growth area in luxury boats – those of 100ft and longer.

“We have growth in boats of over 100ft, but a model development programme this year started at 39ft and went up to 130ft.”

He said Princess Yachts’ main competitors are firms from the UK, Italy, and the USA, with a regional producer usually strong in each territory the firm targets for sales.