Abu Dhabi were building a big lead on Leg 7 of the Volvo Ocean Race on Sunday after beating the fleet to a low pressure system that packs the power to catapult them to within a couple of hundred miles of the finish.

The team skippered by Britain’s twice Olympic silver medallist Ian Walker have been bolstered by the misfortune of their rivals, with overall race leaders Team Telefónica and second-placed Groupama sailing team stuck, struggling to find pace in a high pressure system in fifth and fourth respectively. 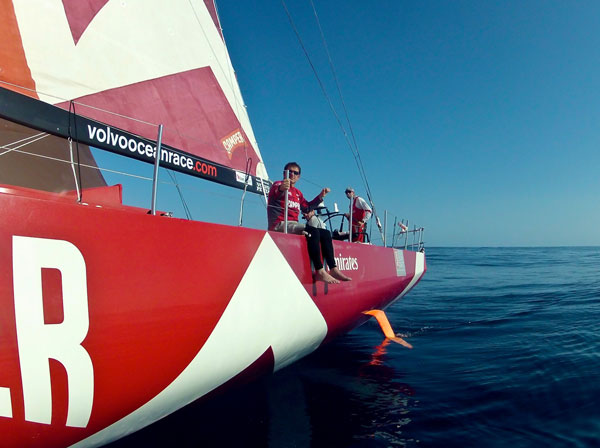 PUMA Ocean Racing powered by BERG remain second on Leg 7, trailing the leaders by 48 nautical miles, while CAMPER are third, 60 nm behind. Both are in prime position to take advantage of an upcoming ridge that is expected to compress the fleet.

Meanwhile, Team Sanya are revelling in a return to racing after missing two consecutive legs with damage. The team are well to the back of the fleet but have made the boldest move of all, taking a route north to within 50 nm of the ice exclusion zones in search of better breeze.

The trek north puts Mike Sanderson’s team in a position to take advantage of a front that will come from the west, which Volvo meteorologist Gonzalo Infante said could see them gain decent pressure and wind shifts that could even edge them ahead of Telefónica and Groupama.

Infante said a ridge to the east of Abu Dhabi, along with the front that is coming from the west, would see the fleet compress over coming days. He said the boats further north were expected to fare best, meaning the possibility of more troubled times for Groupama and Telefónica, while giving CAMPER and PUMA a chance to catch up.

Despite the various pitfalls Walker said he was confident in his team’s course, which had enabled them to race at a 24-hour average speed almost two knots quicker than their closest rivals.

“At the moment conditions look quite good for us to stretch a bit,” Walker said. “We need to get as far as we can because I think we’re going to need every mile to be honest.

“We’ve had a very good last few days. Jules has done a great job negotiating the Gulf Stream and that set us up to take us round the bottom of the high pressure, and I guess now we’re getting the rewards for that. 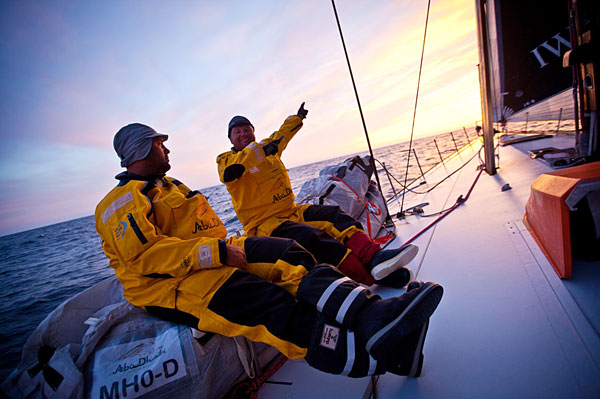 “We should have good wind now until a couple of hundred miles out from Lisbon when we’ll hit a brick wall.”

Groupama skipper Franck Cammas is banking on the upcoming ridge putting a halt on the leaders’ progress, in hope of keeping his team’s winning chances alive.

The disappointed skipper put his team’s current position down to a lack of luck and the play-it-safe tactical option to stick with the fleet.

Cammas is pinning his comeback hopes on the front that will grip the fleet in coming days.

“We hope that the front will reverse things, that the ones behind will come back,” he said. “That’s what I hope for and that’s what you can see on the routing models. There is a good opportunity for us to hook it while the fleet will be compressed.”