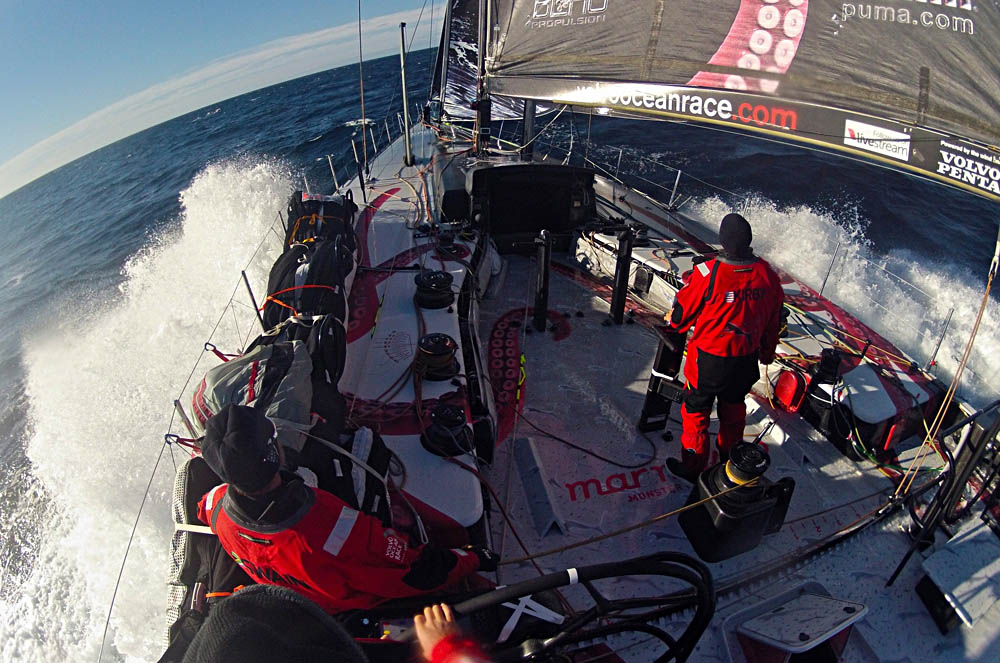 PUMA and Groupama were neck and neck on Sunday, locked in a battle for the top spot in Leg 5 as they raced up through the South Atlantic.

Long-term leg leaders Groupama sailing team were overhauled by Ken Read’s PUMA Ocean Racing powered by BERG at around 0700 UTC – but by 1300 UTC, Franck Cammas’ men were back in charge.

It is the first lead change of the leg since Groupama edged out CAMPER with Emirates Team New Zealand and claimed the top spot at 2155 UTC on March 23.

With more than 1,300 nm of racetrack remaining, Groupama helmsman Damian Foxall said his team were focused on staving off PUMA’s attack and claiming a maximum 30 points for the leg win.

“We want these points so we can have the chance to dig into Telefónica’s overall lead,” Foxall said. “The number of legs and the number of points between now and the finish in Galway are reducing so every single position counts from here on in. It’s very important for us to beat PUMA.”

PUMA’s brief ascension to first place was the first time they have topped the Leg 5 leaderboard since March 20.

The pressure of dueling with their French rivals, winners of Leg 4, was weighing heavily on their shoulders.

Media Crew Member Amory Ross said navigator Tom Addis and skipper Read were grappling to second guess their opposition and figure out how best to fend off any advances.

“The French are tough to predict,” Ross said. “Legs one and two they made bold decisions, legs three and four they played it safe. It’s hard to know what they’re thinking, and that in turn makes our decision making process tougher.”

Ross said it was a blessing that the brains of the boat could focus their efforts solely on Groupama, with third placed Team Telefónica, some 330 nm behind, considered a minor threat.

Telefónica started their comeback at 2133 UTC on Saturday after briefly hitting pause on racing to stop at Cape Horn to repair structural damage.

Skipper Iker Martínez said his team now had full confidence in the boat and were pushing 100 per cent, although the Spanish Olympic gold medallist admitted that securing anything but third place was unlikely.

“The leaders are still very far away, and the ones in the back also,” he said. “Third place looks realistic. Second place looks pretty unrealistic today but anything can happen. We have to keep racing hard and cut down the miles.”

Martínez said he and navigator Andrew Cape had found an unfamiliar sense of freedom in his team’s unusual position in the middle of the fleet.

“We don’t have anyone very close, we’re feeling freedom, we can just take things as they come,” the skipper said. “Now what we have to do is figure out what is the best route, and in any moment we can try something different.”

CAMPER with Emirates Team New Zealand remain in fourth place and continue to trek towards Chile, some 600 nm away, for repairs, while Abu Dhabi Ocean Racing, in fifth, are still assessing their structural damage and considering all options.