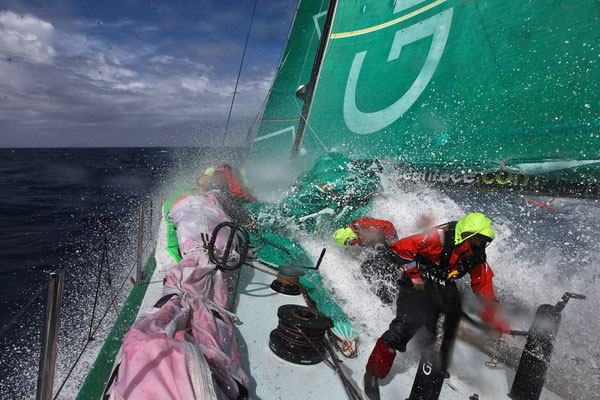 Team Sanya led the fleet out of Auckland and into a likely battering from the weather en route to the Southern Ocean, as Leg 5 to Itajaí got underway with the second half of the Volvo Ocean Race 2011-12 completely open.

Auckland skipper Mike Sanderson enjoyed a dream start to the leg as his underdog Sanya outfit led the fleet around the inshore course on his home waters.

Sanya smoked their five rivals off the start line, enjoying better breeze in a commanding position to round the first mark ahead of Ian Walker’s Abu Dhabi Ocean Racing.

With 6,700 nautical miles of ocean racing ahead of them, no team will be placing any significance on the leaving positions, especially with such a trial by the elements in prospect.

According to race meteorologist Gonzalo Infante a low pressure system to the north east of Auckland is set to intensify as it moves towards the colder waters of the Southern Ocean.

“It’s a heat machine right now,” Infante said. “As it interacts with the cooler air off New Zealand it could generate some big winds — 30 knots up to maybe even 50 or 60 knots.”

PUMA skipper Ken Read said keeping the boat and the crew in one piece was the top priority, with gales likely in the first few days.

Read added: “It’s going to be boat-breaking and person-breaking weather, and I think the smart will prevail.” 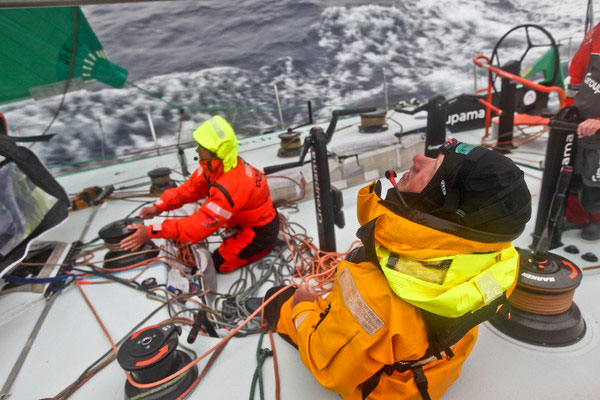 As the leg goes on, the fleet will sail through the notorious Roaring Forties and Furious Fifties where the winds consistently blow above 40 knots and conditions are more than capable of breaking boats.

Three new sailors have been added to the crew lists in Auckland. Anthony Nossiter from Australia is joining Abu Dhabi to replace the outgoing Justin Ferris, while just for this leg Finnish Olympic gold medal winner Thomas Johanson takes over from injured Kelvin Harrap on PUMA and Danish Olympic gold medallist Martin Kirketerp steps in on Sanya for Ryan Houston who has a kidney infection.

With the weather forecast to batter the fleet in the opening day of the leg, it will be a baptism of fire for the new crewmembers.

“Right now all our focus is on the weather forecast, which looks absolutely diabolical for the first 36 hours,” said Ian Walker, skipper of fifth-placed Abu Dhabi. “We just have to prepare our boat and our people as best we can.”

Despite having three leg wins and two in-port victories under their belt, Iker Martínez’s Team Telefónica sit just 15 points clear at the top of the overall leaderboard, with less than 40 points separating the top four boats and fifth-placed Abu Dhabi still determined to fight their way back into the reckoning.

And as the 39,000 nautical mile race hits its mid-point with Leg 5 to Itajaí in Brazil, with more than half the points still to be awarded, it is anyone’s to win.

“The door has always been open for any team to win,” Martínez said. “The teams are very close and there will be some more boats winning legs for sure.”

And with just 18 points separating them from the leaders, skipper Chris Nicholson said his team were still very much in the race.

“It’s still well and truly game on,” he said. “I see the future for the overall podium results for this leg as wide open — as wide open now as they were in Alicante.”

“I’ve been watching this race since 1981 and never before got this far and not really known what’s going to happen going forward,” added Sanderson whose sixth-placed Sanya are showing their best form of the race.

After second place finishes in Leg 4 and the Auckland In-Port Race, PUMA are also on a roll – but skipper Ken Read, who skippered PUMA to third place in the Southern Ocean leg of the 2008-09 event, said keeping the boat and the crew in one piece was the top priority.

“Quite frankly this is not a leg to be talking about wins and losses right now,” he said. “It’s pretty easy to talk tough but the reality is this is not the most hospitable part of the world and we have to make sure we’re smart.”

Leg 5 is expected to take around 18 days to complete.