Hard Miles to the Finish

Conditions overnight for the fleet have been some of the worse experienced so far in the 11th Volvo Ocean Race, with six-metre swells and 25 knots of wind on the nose. Leg leader Groupama 4 (Franck Cammas/FRA) is surviving the conditions and continues to make impressive speed of around 13 knots, extending their lead to 131.30 nautical miles (nm) at 0700 UTC this morning.

Although the fleet is within 460 nm of the finish, these last few miles are proving to be some of the hardest. The crews are exhausted. “This leg is starting to feel like we are running in mud. The closer we get to the finish, the more resistance we encounter,” reported Abu Dhabi’s Media Crew Member (MCM) Nick Dana today.

The fleet is hard on the wind making slow progress to Cape Reinga in a sea state that has worsened with the strong current. Onboard Groupama it has been a steady rhythm of reefing the mainsail, changing headsails and tacking.

“The boat is slamming violently into the waves. It is reminiscent of the state of the leg in the South China Sea,” reported Groupama’s MCM Yann Riou. The crew are quiet as they concentrate on keeping Groupama safe and in the lead under leaden skies.

As the high-pressure moves east tonight, it will bring light northerly winds for the chasing pack, which are in an intense battle for the remaining podium positions. 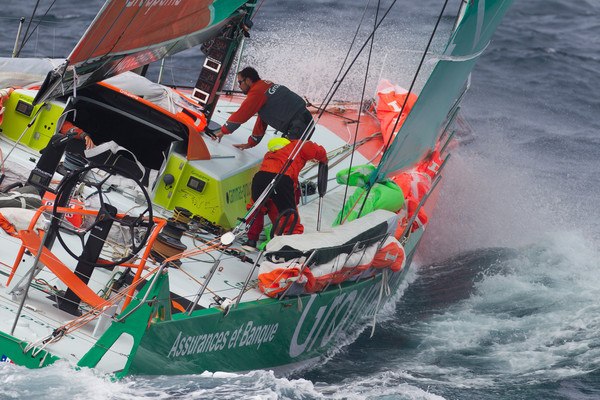 CAMPER with Emirates Team New Zealand has managed to squeeze into second place (based on distance to finish) ahead of PUMA Ocean Racing powered by BERG (Ken Read/USA) and Team Telefónica (Iker Martínez/ESP). The CAMPER crew saw albatross gliding among the big rollers. “I could have sworn I was smack bang in the middle of the Southern Ocean, having skipped the Auckland stopover altogether,” wrote MCM Hamish Hooper.

In a leg that is, according to Hooper, seeming to take forever, CAMPER is running on reserve food from a bag hastily stowed at the last minute when estimates of the leg duration increased due to the delayed start from Sanya. Other teams have run out of snacks and are splitting their daily rations in half in a bid to fuel the final hours.

Onboard PUMA, skipper Ken Read reported a terrible sea state and a huge swell. “Today was a really big swell, probably six or seven metres. We looked at each other on deck and said, ‘what the hell did we do to deserve this?’” he said.

But although conditions are not good, the spirit onboard PUMA has been buoyed by the intensity of the three way fight for second and third place. Read’s team is very much in the hunt, crossing the bow of Telefónica and in sight of the Spanish team, who are now two nautical miles astern.

“We couldn’t have gone more in two opposite directions to get here. It’s a bizarre game, this game that we play,” Read added.

“CAMPER and Telefónica are too close to cover both, and they have incentives of their own,” PUMA’s MCM Amory Ross remarked. “CAMPER is undoubtedly feeling the hometown pressure, and Telefónica hasn’t finished a leg anywhere but first,” he said.

Meanwhile, Sanya (Mike Sanderson/NZL) and Abu Dhabi Ocean Racing (Ian Walker/GBR) are engaged in their own battle 40 nm behind. Both are still a threat and in close enough range to mount an attack on the trio ahead. “We are fighting for every inch right now,” reported Nick Dana from on board Abu Dhabi, who was 15 nm ahead of Sanya, but 48 nm behind Telefónica at 1000 UTC today.

Traditionally there have always been some battles down the coast of New Zealand coast right into the finish in Auckland. “This is shaping up to be no different,” CAMPER skipper Chris Nicholson, said.