Groupama Leads Across Gateway To The South 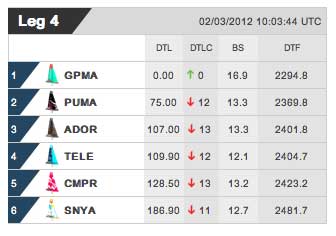 As Groupama 4 (Franck Cammas/FRA) led the fleet across the Equator and into the Southern Hemisphere around 0700 UTC this morning, the compression of the fleet appeared to have begun as all five teams made gains on Groupama’s lead.

During the darkness, the high speeds of the past few days had reduced and the fleet had slowed to around 13 – 16 knots as the first effects of the Doldrums started to come into play. At 0700 UTC today, the fleet had compressed to within 63 nautical miles (nm) of Groupama 4.

However at 1000 UTC, Groupama 4’s average speed had increased dramatically to nearly 17 knots, while the rest of the fleet struggled to produce 12 -13 kts and the team had drawn their lead back out to 75 nm over PUMA Ocean Racing powered by BERG.

The compression had been expected to last for at least 24 hours as the fleet sails south towards the eastern tip of the Solomon Islands where the wind is forecast to become lighter, especially tomorrow.

The Doldrums are connected to a semi-permanent feature called the South Pacific Convergence Zone around the western Solomon Islands and New Caledonia, but although speeds will drop, it is unlikely the fleet will hit the wall and come to a standstill, as is often the case in the Atlantic, with thunderstorms and squalls remaining a constant threat.

“Some squalls have been up to 38 knots and have resulted in us having to sail 60 degrees off course to weather of them,’’ says Ian Walker, skipper of Abu Dhabi Ocean Racing. “It is a real test for the crews who need to rapidly reduce sail as fast as they can and hang on tight until the rain squall passes.”

Co-skipper of fifth placed CAMPER, Stu Bannatyne agrees: “These thunder clouds pack a huge amount of power, so you have to be constantly monitoring them to get the most out of the and avoid any potential damage, which is not what we need right now.”

Groupama 4, PUMA (Ken Read/USA) and Abu Dhabi Ocean Racing (Ian Walker/GBR) – now in third place – are all looking strong in the east and are still able to sail fast, wide angles. It’s not the case for Telefónica (Iker Martínez/ESP), CAMPER with Emirates Team New Zealand (Chris Nicholson/AUS) and Sanya (Mike Sanderson/NZL) 191 nm to the west, who will soon be forced to sail higher and slower.

“We are really seeing the benefit of being in the east and today we have passed both CAMPER and Telefónica,” reported Ian Walker today.

On board PUMA, the crew is happy knowing that whatever the others in the fleet decide, their position in the east is free of any geographic interference and allows them to be less reliant on straight-line boat speed and more focussed on sail selection and trim.

Beyond the island of Vanuatu, there will be new southeasterly trade winds, which Groupama 4 will benefit from once clear of the eastern tip of the Solomon Islands. Further south still, beyond New Caledonia, there is yet another new weather system with which the fleet will connect that should take them to the finish in Auckland in about eight days’ time.

At 1000 UTC this morning, Groupama 4 had a lead of 75 nm over PUMA’s Mar Mostro and Walker’s Abu Dhabi Ocean Racing had retained their third placed gained overnight, 107 miles behind. However, the entire pack had all lost miles to the leader and all but PUMA are over 100 nm behind.