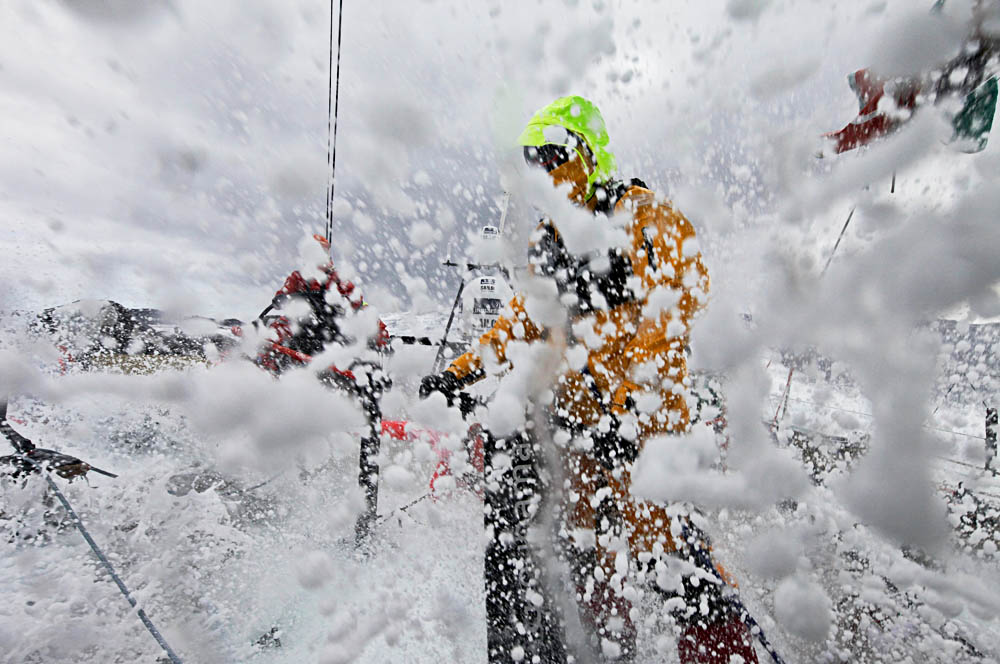 The leading pack were careering through the lower latitudes of the South Pacific in mountainous seas and winds gusting over 40 knots on Friday, as skippers and crews turned their thoughts to reining in the power of their boats rather than squeezing out more speed.

CAMPER skipper Chris Nicholson had pushed hard to grab that lead, with his team racking up the best 24h-hour run of over 530 nautical miles, before following a plan to ease off in the darkness.

“Right now we have got the hammer down and pushing pretty hard,” Nicholson said in the early hours in UTC terms, as he tried his best to hang on. “We are in about 35 to 40 knots and we think are the only boat to still have the spinnaker up so we are going to try to hang on to it until dark and then go for a jib.

“It’s the age old question of just how hard do we push it? It is a very fine line.”

Nicholson said he put little store by talk of leads given the constant risk of disaster in such high speed conditions.

“I don’t feel comfortable talking about being in the lead right now because with one slight problem it will evaporate in no time,” he said.

CAMPER MCM Hamish Hooper described life on board during the times they were going flat out. “These conditions — blowing up to 43 knots, averaging 24 knots but doing over 30 knots of boat speed at times while literally skimming up, down, over and through seven-metre waves in the freezing cold — it feels and sounds like you are on an out of control freight train, travelling through time with a conductor who gets the accelerator and brakes mixed up,” he said. 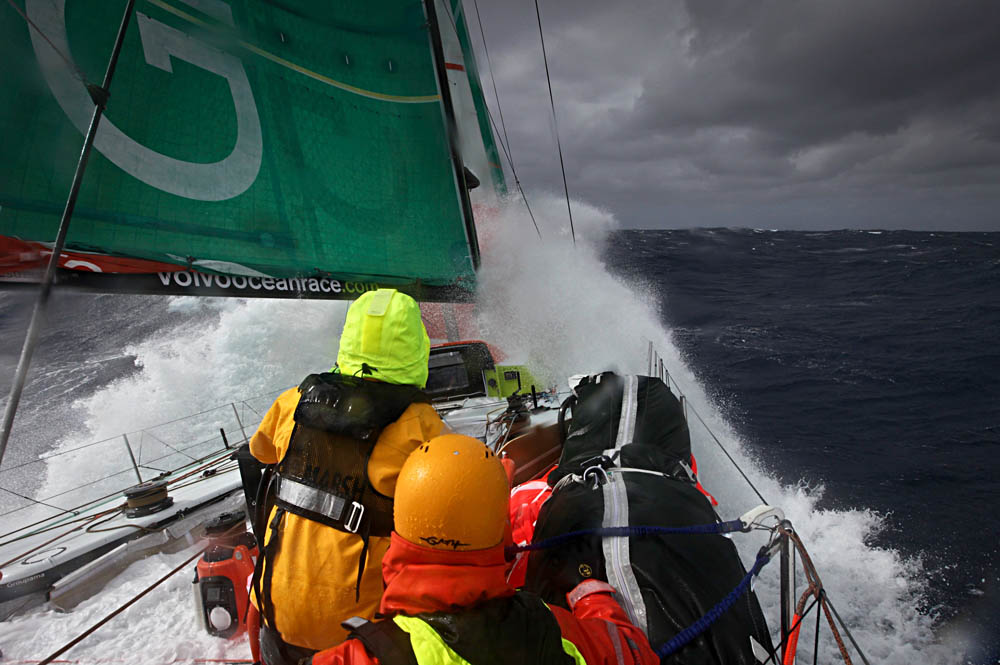 But with almost a week of ferocious speed sailing ahead of them, uppermost in all the crews’ minds is the goal of reaching Cape Horn intact.

Groupama helmsman Charles Caudrelier said he believed there is nothing tougher than Volvo Open 70 sailing in this part of the world with the waves presenting the greatest challenge.

“You’re very badly protected,” he said. “The boats are very fast and wet. The only way to keep the boat in one piece is to slow down.

“We are far from being as fast as we would if the sea state was good. We could be above 30 knots of speed and we actually are around 20-25 knots. We have reduced the sail area and are nursing the boat.”

Caudrelier said he thought some other boats had followed suit to lessen the risk of a costly high-speed wipe out.

“I think everyone slowed down, some more than others,” he said. “This surely is the best leg to win but it’s also the one which can lose you the Volvo Ocean Race if you break the boat here.”

PUMA MCM Amory Ross said the team’s 70 foot boat had been “zigzagging around the ocean, the very big ocean, like a toy boat in a bathtub”.

“I’ve never seen waves this big,” Ross said. “One second we’ll be doing 30 knots, the next 15. The transition period between those two speeds is almost instantaneous. Guys are literally flying out of the bottom of their bunks.

“If you’re not holding onto something at all times you could find yourself doing the Superman slide across the deck or through the interior. Not fun, or safe.”

Telefónica skipper Iker Martínez said they had been enjoying a close duel with PUMA overnight and pledged to continue the fight.

“Today has been a little complicated,” the Spanish skipper said. “We have PUMA very close to us and we’ll continue to fight — with our heads, but hard.”

Ian Walker’s fifth place Abu Dhabi Ocean Racing looked to have found an opportunity to dive south from their northerly position but were yet to reach the storm track which would fast forward them to the east. At 1400 UTC they were still 480 nm off the lead.

“The good news is we have enjoyed some nice downwind sailing conditions,” said skipper Ian Walker. “Secondly the boat and crew are in good shape and perhaps most importantly we are still getting closer to Cape Horn (albeit slower than we would like).”

That was not the case for Mike Sanderson’s Team Sanya, who were making steady progress towards New Zealand after turning back yesterday with a broken rudder. Sanya are expected to reach Tauranga in the Bay of Plenty in the next few days and plan to be back in the race in time for the in-port race in Miami at the latest.