Télefonica Preys on Camper in Race to Malacca Strait

by admin • February 2, 2012 • Global Ocean Race, Regattas • Comments Off on Télefonica Preys on Camper in Race to Malacca Strait • 994

In contrast to the port tack beat for the first four days of this leg, the last 24 hours have been nothing short of dramatic. This afternoon at 1600 UTC, Team Telefónica with Iker Martínez was screaming through the fleet, sailing up to two knots faster than the rest and picking off places without remorse. Her final victim was Chris Nicholson’s CAMPER with Emirates Team New Zealand who, tonight at 1900, also fell prey to Telefónica who are now back at the top of the leg leaderboard as well as leading the race overall.

Nicholson, who took the lead from PUMA’s Mar Mostro earlier today after last night’s tacking frenzy, dared not look over his shoulder this afternoon as Team Telefónica gobbled up his hard-earned lead.

“What we are trying to do is get over to the Indonesian shore as fast as possible and take a right hand shift. Telefónica’s leverage will be hard for them to use if we can manage that,” said Nicholson earlier today. But it was in vain, and Telefónica is now half a mile in front of the red boat and sailing quicker.

Groupama 4 (Franck Cammas/FRA) too was swiftly relegated to third place at 1600 UTC, only to lose out as well at 1900 UTC tonight to Mar Mostro, who earlier collided with some ocean debris costing the team precious miles as well as causing minor damage to their leeward daggerboard. 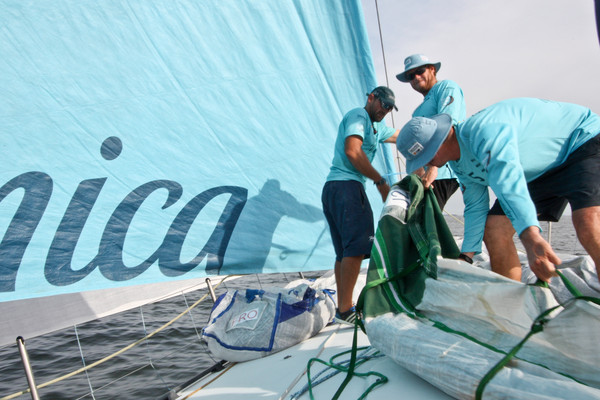 The boat had immediately slowed after a loud thud was heard. The team scrambled to regain speed and have tacked three times today to set up for what they hope will be the ideal approach to the waypoint at Palau We, which they must leave to starboard. Telefónica is the only boat to windward of Mar Mostro in a lateral separation for the top four boats extending 25 nm to CAMPER in the south.

Meanwhile Ian Walker and Abu Dhabi Ocean Racing are struggling to keep up the pace. Walker is expecting thunderstorms and lots of cloud activity again tonight, which could again affect the leg leaderboard again.

Bringing up the rear is Team Sanya who continue to seek out any opportunities they can to climb up the order and claim some much-needed points. “We have done all we can, despite some frustrating losses to the new boats, and yet we still remain in pouncing distance,” said MCM Andrés Soriano today.

By noon tomorrow, the fleet will have arrived at the entrance to the Malacca Strait and the order could be shaken up again during this 500 nm trip through some of the most congested and hazardous waters in the world.