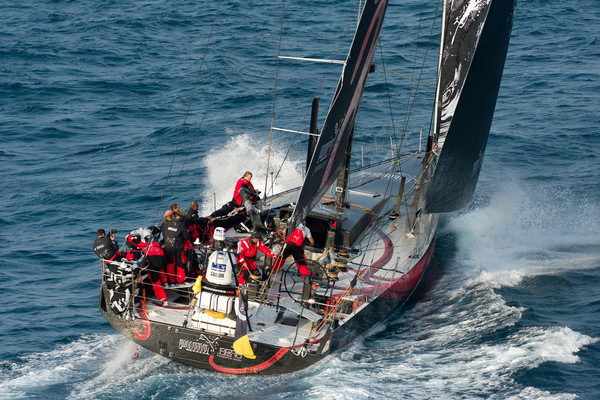 PUMA Ocean Racing powered by BERG has finally turned east and is sailing fast in the same direction as the rest of the fleet after tracking north for days. However, despite benefiting first from a northerly wind shift PUMA is still heading east rather than south towards the finish in New Zealand.

“We had no plans to be a couple of hundred miles away from our nearest competitor,” said skipper Ken Read, who believes his split from the pack is not a gamble.

“It looks horrible, but I’d say that historically, it is the more correct way of doing it. I think no one came this way as they didn’t have the breeze to do it.”

Read is now hoping his team can get east faster than the rest and maintain their separation from the fleet, a scenario he said might not play out fully for at least another week.

“If we get close, that means we’ve failed,” Read said. “We need to have a north and east advantage gauged on them all the time for this to work.

“We have to have a better angle the entire time going south. We will do an arc, a big old boomerang around the outside of the fleet,” he said optimistically.

Read said PUMA’s split had tested the mettle of the whole crew and weighed especially heavily on his own shoulders.

“I’d be lying if I said that beat up north wasn’t one of the most miserable day and a half of my life,” he said.

“Knowing we’d left the fleet with a reef in our main, number four jib, literally just airborne off of square waves, current with you and 25 knots of breeze against you, horrible seas — it was pretty much all we could do on board to keep the mood up there.”

However Read maintains the breakaway strategy was not a foolhardy gamble to try to catapult PUMA back into contention.

“When you’re sailing in a northerly that is coming down to you and the rest of the group are sailing away in a southerly unfortunately you don’t have the choice,” he said.

“We are now sailing under spinnaker and it seems like we have a good wind shift,” said Diego Fructuoso, Telefónica’s Media Crew Member (MCM). “We are all hoping that the crazy days are behind us and we can start heading south.”

Franck Cammas’ Groupama sailing team is in third place 62 nautical miles (nm) to the north of CAMPER, a position which Chris Nicholson says he is confident his crew can defend against.

“We’re probably in the lightest breeze we will be in right now, for the next couple of days, but once we get into the trades, that will minimise the damage they (Groupama) can do,” he said.

“I think we’re going bleed a few miles, but hopefully we’ve got enough in the bank to still wriggle out further to the east,” he said. “We knew we’d have to pay up some time.

Team Sanya and Mike Sanderson are still in the mix, but have only Abu Dhabi Ocean behind them in their rear view mirror.

First they had to make a quick swerve round a long line of drift nets and deal with the unwelcome advances of an angry and aggressive fishing boat crew.

Shortly afterwards a large plank hit one of their rudders hard. Luckily the boat was only doing 11 knots and seems to have come off unscathed.

Along with everyone else Abu Dhabi Ocean Racing skipper Ian Walker has been keeping a close eye on PUMA’s northerly route.

“I’m starting to think they’re looking in a strong position right now,” he said. “I think we should know in a day and a half.

“But if he [Read] sails all the way up there and around the whole fleet then I will willingly buy him a drink,” said the British double Olympic medallist, who celebrated his 42nd birthday today.

It is unlikely the fleet will make the big turn south for another 1,000 nm, but for now they are enjoying some sunny sailing and reaching in smooth seas. Sunglasses have made their first appearance and waterproofs have been consigned to below decks, at least for the time being.