A fascinating tactical contest is being played out at the front of the fleet as they close on the north west tip of Sumatra on the fourth day of the second stage of Leg 3 to Sanya in China.

At 0700 UTC today leg leaders PUMA Ocean Racing powered by BERG remained the closest to the first course turning point — the island of Pulau We which marks the entrance to the restricted waters of the Malacca Strait.

However, the PUMA crew are feeling far from secure as they approach the unpredictable wind convergence zone to the north of the strait under constant threat from second placed CAMPER with Emirates Team New Zealand, third placed Groupama sailing team and overall race leaders Team Telefónica who are back in fourth but catching up fast in the north. 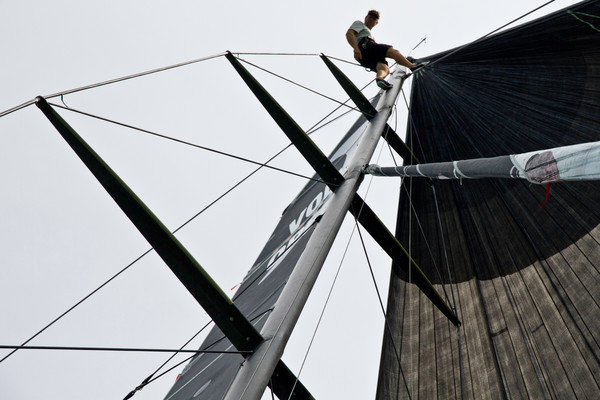 PUMA skipper Ken Read said his crew were delighted to be leading but would prefer not to have to face such uncertain conditions over the next 48 hours.

“It’s nice to see our name at the top of the leaderboard,” he said. “Right now we’re bobbing and weaving through squalls all over the place and I guess we’d feel a little bit more comfortable if we didn’t have a place like the Malacca Strait coming up.

Read said that although the going had been good so far, the PUMA crew were bracing themselves for difficult times ahead with a potential leaderboard re-shuffle over the next two days.

“Unfortunately all of this work is great, it’s wonderful, and we certainly aren’t slow in these conditions, there are other boats that are of similar speed, but this race is going to stop and restart again,” he said.

“I hate to be the eternal pessimist here, but the Malacca Strait is going to wreak its normal havoc and it’s going to turn us inside out several times unfortunately,” he added.

Second placed CAMPER relinquished much of their northerly positioning overnight in a tactical gambit to trade lateral separation for forward distance on their closest rivals.

According to navigator Will Oxley the attempt to better position themselves in relation to PUMA and third placed Groupama was mostly successful but has left them with a new concern about Telefónica, now the most northerly boat.

“It’s just a big game of chess as we all set up for the corner at Sumatra,” he said this morning. “We wanted to use some of our leverage to roll over Groupama and if possible PUMA. We managed it with Groupama but PUMA is proving a little more difficult.

“At the same time we are keeping an eye on Telefónica who are now 10 miles to the north of us. It’s a fine line but we will see what happens – we still have 480 miles to the corner,” Oxley said. 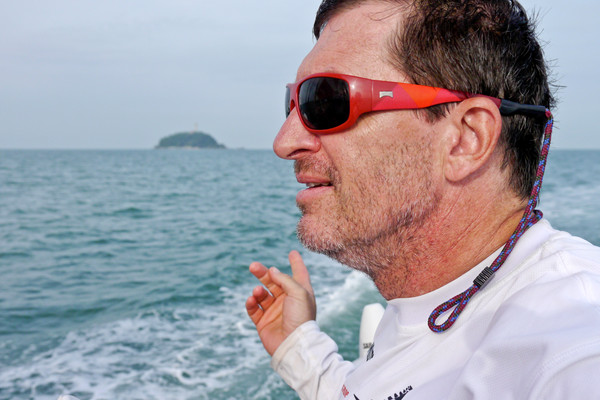 Iker Martínez’s Team Telefónica followed CAMPER to the north two days ago and have since aggressively protected their high road route. Today this strategy appeared to be paying handsomely with the Spanish boat making the biggest gains on the fleet.

At the 1000 UTC position report they had taken almost seven miles out of leaders PUMA while the rest stayed even or lost slightly.

The gains will have been particularly rewarding for the Telefónica crew who have been in a constant battle to repair damage to their bowsprit caused by a fitting failure on their enormous code zero headsail in the first few hours of the Leg 3 second stage.

Navigator Andrew Cape maintained their move to the north had not been a risky gamble to get back in contention with a single roll of the dice.

“We were behind, but that didn’t influence our decision,” he said. “It would be a tricky decision to make if you’re not behind. If you’re winning you’re not going to throw away miles, which if you go north when we did was a loss of 10 miles instantly.

“It was the right thing to do,” Cape said. “The weather forecast looked horrible and this was a good opportunity. The opportunity caused a lot of initial pain, but obviously two days down the road it’s paying back.

“That might have affected other people’s decision not to do it, but we knew we’d get rewards in a day and a half so we’re pretty happy now,” he concluded.

Meanwhile, on third placed Groupama Franck Cammas’ crew have been steadfast in maintaining their course slightly to the south but in clear sight of the leading pair, despite some fearsomely hot conditions on deck.

Groupama skipper Franck Cammas declared himself happy to be in the scrap for the lead at this stage.

“We’re alright, we are in the right group,” he said. “The winds tonight will be very shifty and disturbed. It’s good to be in the leading group. We’d like to be further ahead, but as long as we are in contact it’s fine.”

“Right now I think Telefónica is very, very well situated. They managed to create a huge delta, especially compared to CAMPER, which is a bit surprising. They will get some cash in the next few hours.”

Telefónica’s continuing charge had brought them to within 0.6 nautical miles of Groupama who remained in third, less than three nautical miles adrift of CAMPER.